Pakistan has made biggest sacrifices in war on terror: Interior minister Ahsan Iqbal 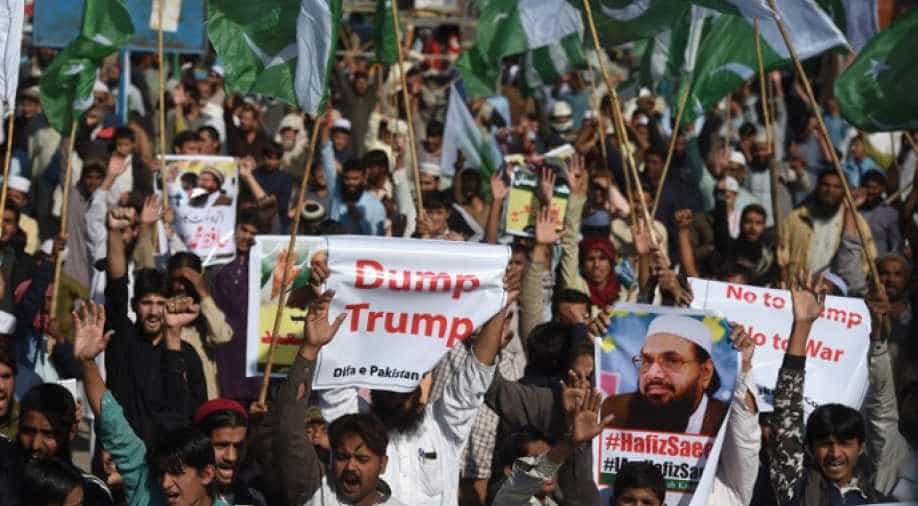 Activists of the Difa-e-Pakistan Council shout anti-US slogans at a protest rally in Karachi on January 2. Photograph:( AFP )

Just hours after Pakistan's ambassador to the United Nations Maleeha Lodhi slammed the US, interior minister Ahsan Iqbal said Pakistan had made the biggest sacrifices in the war against terror.

On Tuesday, Pakistan foreign minister had hit out against Trump administration challenging it to conduct an independent audit to find out whether the US had spent $33 billion after Trump accused Pakistan of taking the money over a 15-year period.

American officials have kept the pressure on Pakistan with the White House asserting that Pakistan needs to do more on terrorism. At the UN, Nikki Haley, the US ambassador said Pakistan has been engaging in a "double game".

Pakistan prepared to go all out against the recent spate of accusation by the Trump administration with top Pakistani officials slamming the US administration over a range of terror-related issues.

"The US president's recent remarks are akin to belittling our sacrifices. We are a dignified nation and no one has the right to attack our dignity," Ahsan Iqbal said.

"I want to remind the US that these thorns are your inventions," the interior minister added.

"As soon as the war against the Soviets ended, you withdrew and went home without thinking what your radicalizing of Afghanistan to create an anti-Soviet narrative would lead to. The seeds of the extremist views you used to win that war weren't going to suddenly start producing computer chips: they were going to breed terrorism and extremism," the minister said, adding that Pakistan was still "paying" for the seeds the US planted in the region.

On the Afghan refugee crisis, Pakistan's interior minister said the US hasn't allowed Syrian refugees into its territory but his country had allowed over three million into its country.

"We have battled forces that are headquartered in Afghanistan. We have sacrificed our troops in Operation Raddul Fasad to rid this region of this menace," he said.

"If President Trump and company want peace in Afghanistan, they should see it from their own perspective and not India's," he added.