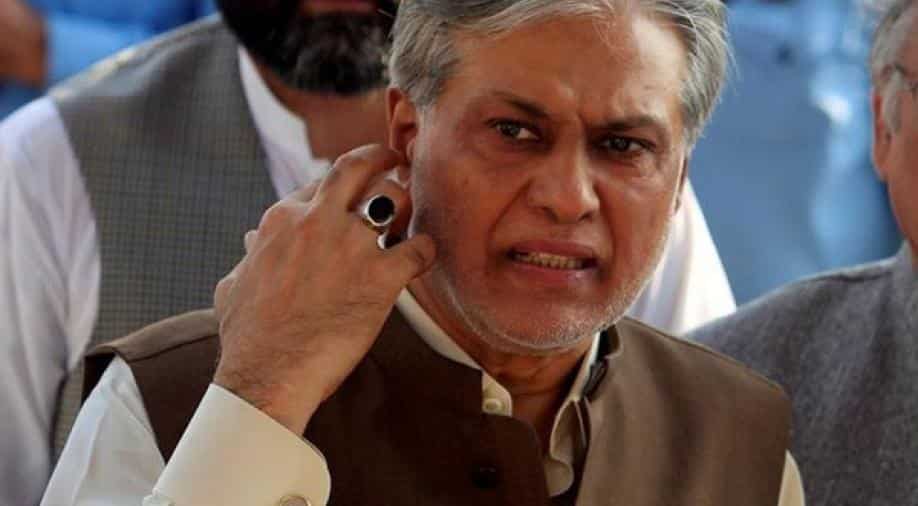 Pakistan Finance Minister Ishaq Dar, who is on a visit to the US, said that his country is willing to buy fuel from Russia provided it is given at the same rate as to neighbouring India. Photograph:(ANI)
Follow Us

An anti-corruption court in Pakistan on Tuesday directed authorities to auction the assets and seize the bank accounts of absconding former finance minister Ishaq Dar in a graft case filed against him in the Panama Papers scandal.

The case about owning "assets beyond known means of income" is among four graft cases filed by the National Accountability Bureau (NAB) following the Supreme Court's order of July 28 against Dar and ousted prime minister Nawaz Sharif and his family.

The decision came on an application filed by the NAB, seeking auction of Dar's assets and asking the court to appoint a beneficiary of recovered amount, Dawn newspaper reported.

Judge Mohammad Bashir had reserved the verdict on the application on Monday after the anti-graft watchdog submitted details of Dar's assets.

The NAB had earlier moved the Islamabad-based accountability court for the auction of movable and immovable properties owned by Dar, a close aide of Sharif, as he has been in London since October 2017.

Dar, the father-in-law of Sharif's younger daughter, was already declared as absconder in the corruption case after he went to London in October last year but never came back to face the trial.

The case of asset beyond means was launched against Dar in September 2017 on the orders of Supreme Court after it disqualified Sharif and ordered corruption cases against him, his children Maryam Nawaz, Husain and Hasan and son-in-law (retd) Captain Muhammad Safdar.

The anti-corruption watchdog already seized all of movable and immovable assets of 67-year-old Dar located in Lahore and Islamabad.

According to the case, Dar acquired assets worth Rs 831.7 million, which was disproportionate to the known sources of his income.

The Panama Papers case is about alleged money laundering by Sharif in the 1990s when he twice served as Pakistan's prime minister to purchase assets in London.