Nepal: Clash breaks out between fuel price protesters and police 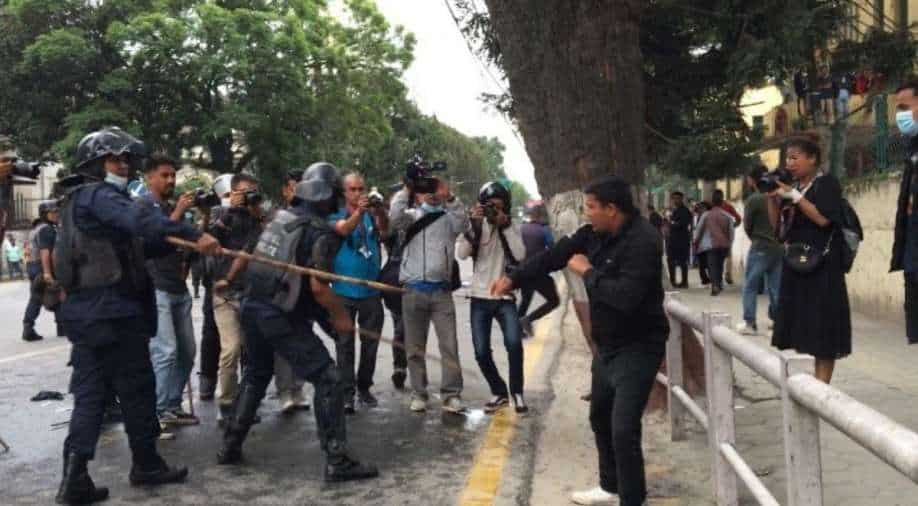 About 100 members of All Nepal National Free Student Union (ANNFSU), the student wing of the main opposition Nepal Communist Party (Unified Marxist-Leninist) clashed with police on Monday during the protest against the fuel price hike.

The student union carried out a rally against the government's latest hike in fuel and domestic cooking gas prices and demanded a cancellation.

A violent scuffle broke out between the demonstrators and the police. There was stone pelting from both sides and further to disperse the crowd, the police lathi-charged and fired tear gas.

“This unqualified coalition government has been continuously increasing the price of petroleum products. We are protesting to give some price relaxation to the people. At least, to a limit where at least we can afford two meals a day,” Hark Bahadur Bohara, a protester told WION.

The increase in the price of petrol, diesel, and cooking gas comes amid rising global crude prices after Russia's invasion of Ukraine.

The state-owned monopoly Nepal Oil Corporation (NOC) raised the price of one litre of petrol and diesel by 12 per cent and 16 per cent respectively, prompting fears of broader price hikes.

With the new price coming into effect, the price of petrol will now cost Rs 199 per litre and diesel and kerosene Rs 192 per litre.

Similarly, the price of aviation fuel has reached Rs 185 per litre (domestic) and USD 1,645 per kilo litre (international).

A cylinder of LPG now costs Rs 1800. However, the NOC has not increased the prices of Liquefied Petroleum (LP) gas.

The oil monopoly said that it hiked the prices of petroleum products in line with the international market.

As the amount to be paid to the Indian Oil Corporation for the purchase of petroleum products is increasing, the supply system has to be kept smooth and the price has to be adjusted to the cost, the corporation stated.

The corporation said it has been facing an extreme financial crisis.

Its due amount to be paid to Indian Oil Corporation for the purchase of petroleum products would reach Rs 22 billion by June 23, indicating another hike soon.

Despite the hike, the Nepal Oil Corporation will be facing a monthly loss of around Rs 4.70 billion. The accumulated losses have been expected to reach Rs 55 billion by June end.

Following a steep hike in fuel prices, fares for public transport and goods vehicles had been increased by up to a 7.7 per cent following the fuel price increase

Rising oil prices are a major factor fueling inflation that is biting citizens of the country.

According to Nepal Rastra Bank, the year-on-year consumer price inflation jumped to a staggering 7.87 per cent in May, hitting a 69-month high, as compared to 3.65 per cent last year in May.