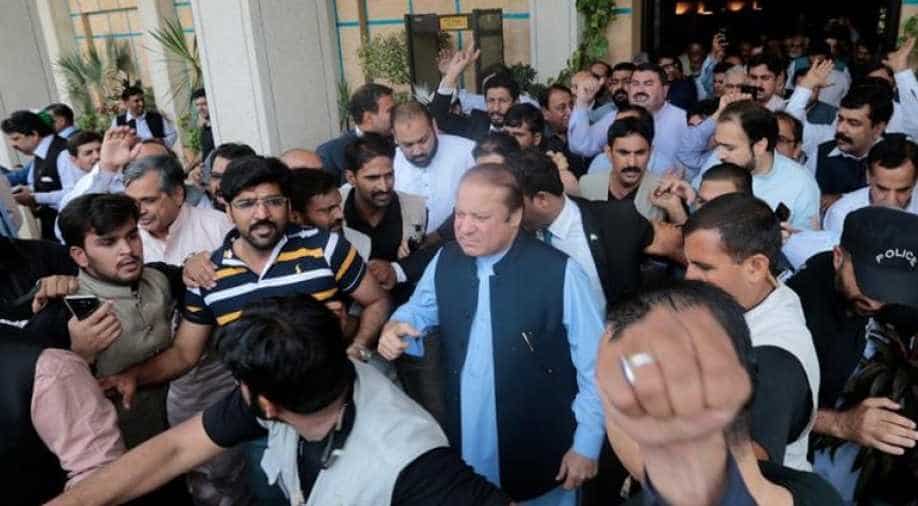 Supporters of former Pakistani PM Nawaz Sharif crowd around him as he leaves Punjab house in Islamabad on August 9. Photograph:( Reuters )

Former Pakistan prime minister Nawaz Sharif  appeared before a National Accountability Bureau (NAB) court on Tuesday in relation to the three corruption cases against him in the Panama Papers case, The Dawn reported.

The proceedings lasted for a very short while as the former Pakistan prime minister informed the court that he needed to attend to his wife who was unwell. The court granted him permission to leave, report in The Dawn said.

The appearance was just a formality to ensure that the accused was ready to face the trial, PTI reported.

Nawaz Sharif, who arrived from London yesterday, had been summoned by the court after his failure to appear at a hearing on September 19.

The court had also summoned his daughter Maryam, son-in-law capt (retd) Safdar, and his two sons - Hussain and Hassan - to appear before it today.
His sons, however, excused themselves on account of their mother's ill-health.

Nawaz Sharif is expected to hold important meetings with aides and to address media in the evening, PML-N sources told PTI.

Sharif was in London from August 31 to be with his ailing wife Kulsoom who is undergoing treatment for throat cancer.

He decided to return to Pakistan after consultations with senior party leaders including his younger brother and Punjab province Chief Minister Shahbaz Sharif in London.

The NAB has filed three cases of corruption and money laundering against Sharif, his sons, son-in-law, and Finance Minister Ishaq Dar in the Accountability Court in Islamabad and Rawalpindi recently.

Last week, the anti-graft body froze the bank accounts and seized properties of the former Pakistan PM and his family members to put pressure on them to appear before the court.