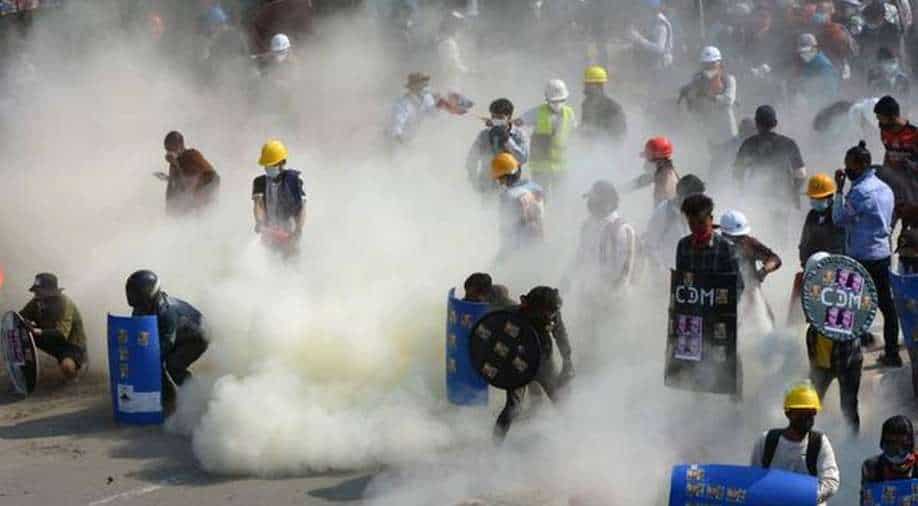 Ten days after seizing power in Myanmar, the generals issued their first command to journalists: Stop using the words “coup,” “regime” and “junta” to describe the military’s takeover of the government. Few reporters heeded the Orwellian directive, and the junta embraced a new goal: crushing all free expression.

Since then, the regime has arrested at least 56 journalists, outlawed online news outlets known for hard-edge reporting and crippled communications by cutting off mobile data service. Three photojournalists have been shot and wounded while taking photographs of the anti-coup demonstrations.

With professional journalists under pressure, many young people who came of age during a decade of social media and information sharing in Myanmar have jumped into the fray, calling themselves citizen journalists and risking their lives to help document the military’s brutality. They take photographs and videos with their phones and share them online when they get access. It is a role so common now they are known simply as “CJs.”

“They are targeting professional journalists, so our country needs more CJs,” said Ma Thuzar Myat, one of the citizen journalists. “I know I might get killed at some point for taking a video record of what is happening. But I won’t step back.”

Thuzar Myat, 21, noted that few people were able to document the protests in 1988, when the Tatmadaw, as the military is known, stamped out a pro-democracy movement by massacring an estimated 3,000 people. She said she saw it as her duty to help capture evidence of today’s violence even though one soldier had already threatened to kill her if she did not stop.

The regime’s apparent goal is to turn back the clock to a time when the military ruled the country, the media was firmly in its grip and only the wealthiest people had access to cellphones and the internet. But the new generation of young people who grew up with the internet say they are not giving up their freedoms without a fight.

“What we are witnessing is an all-out assault on the centers of democracy and liberty,” said Swe Win, co-founder and editor-in-chief of Myanmar Now, one of the banned outlets. “We are very concerned that Myanmar will become North Korea. They will crush any form of information gathering and sharing.”

The Tatmadaw has a history of suppressing opposition. When it seized control in 1962, it reigned for nearly a half-century before deciding to share power with elected civilian leaders and opening the country to the outside world.

In 2012, under a new quasi-civilian government, inexpensive cellphones began flooding in, and Facebook became the dominant online forum. A vibrant media sprouted online, and newsstands overflowed with competing papers.

Since the Feb. 1 coup, protests have erupted almost daily — often with young people at the forefront — and a broad-based civil disobedience movement has brought the economy to a virtual halt. In response, soldiers and police have killed at least 536 people.

At the United Nations on Wednesday, the special envoy on Myanmar, Christine Schraner Burgener, warned that “a bloodbath is imminent.” The regime has arrested thousands, including the country’s civilian leader, Aung San Suu Kyi. On Thursday, one of her lawyers said she had been charged with violating the official secrets act, adding to a list of alleged offenses.

While the U.N. Security Council has not penalized Myanmar’s military, it has spoken in increasingly negative terms about the repression. In a statement issued Thursday evening, the council “expressed deep concern at the rapidly deteriorating situation and strongly condemned the use of violence against peaceful protesters and the deaths of hundreds of civilians, including women and children.”

While the military uses state-owned media to spread its propaganda and fire off warnings, attacks on journalists have increased drastically in recent weeks, as have arrests.

To keep from being targeted, journalists have stopped wearing helmets or vests emblazoned with the word “PRESS” and try to blend in with the protesters. Many also keep a low profile by not receiving credit for their published work and avoiding sleeping in their own homes. Even so, their professional-quality cameras can give them away.

At the same time, soldiers and police routinely search civilians’ phones for protest photographs or videos.

“If you are arrested with video clips, you can go to prison,” said Myint Kyaw, who was secretary of the Myanmar Press Council, an independent advocacy organization for the news media, before quitting in protest in February along with most of the board.

At a recent news conference, a spokesperson for the junta said it was up to journalists to avoid behavior that could be construed as breaking the law.

“Only the journalist’s action itself can guarantee that they will not be arrested,” said the spokesperson, Brig. Gen. Zaw Min Tun. “If their actions violate the law, then they will be arrested.”

All three journalists who have been shot and wounded say they were targeted by security forces.

Freelance journalist Ko Htet Myat Thu, 24, was taking pictures of protests Saturday in Kyaikto, a town in southern Myanmar, when a soldier shot him in the leg, he said. A video of his arrest taken by a citizen journalist from a nearby building shows soldiers beating him and forcing him to hop on his good leg as they led him away.

Another photojournalist shot that day, Si Thu, 36, was hit in his left hand as he was holding his camera to his face and photographing soldiers in Mandalay, the country’s second-largest city. He said he believes the soldier who shot him was aiming for his head.

“I had two cameras,” he said, “so it was obvious that I am a photojournalist, even though I had no press helmet or vest. I’m sure that the military junta is targeting journalists because they know we are showing the world the reality on the ground, and they want to stop us by arresting or killing us.”

Of the 56 journalists arrested, half have been released, according to a group that is tracking arrests. Among those freed were reporters for The Associated Press and the BBC.

But 28 remain in custody, including at least 15 who face prison sentences of up to three years under an unusual law that prohibits the dissemination of information that might induce military officers to disregard or fail in their duties.

Ma Kay Zon Nway, 27, a reporter for Myanmar Now, livestreamed her own arrest in late February as she was running from police in Yangon, Myanmar’s largest city. Her video shows police firing in the air as protesters flee. The sound of her labored breathing is audible as police catch up and take her away.

She is among those who have been charged under the vague and sweeping statute. She has been allowed to meet just once in person with her lawyer.

Swe Win, the Myanmar Now editor, himself served seven years in prison for protesting in 1998.

“All these court proceedings are being done just for the sake of formality,” he said. “We cannot expect any fair treatment.”

One of them, Ko Aung Aung Kyaw, 26, was taking videos of police arresting people in his Yangon neighborhood when an officer spotted him. The officer swore at him, aimed his rifle and fired, Aung Aung Kyaw’s video shows.

The bullet hit a wall in front of him.

“I know that recording these kinds of things is very risky, and I might get shot to death or arrested,” he said. “But I believe I need to keep doing it for the sake of having a record of evidence to punish them.”