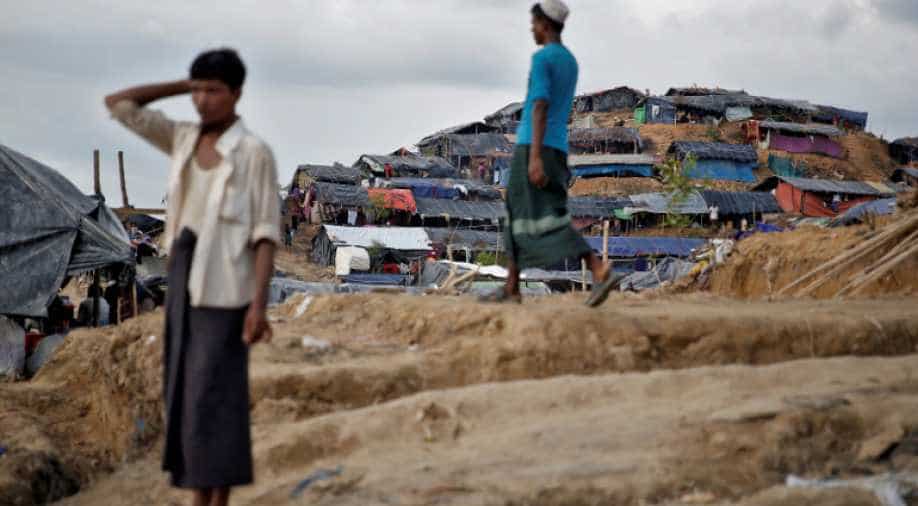 A general view of a refugee camp at Cox's Bazar. Photograph:( Reuters )

The UN refugee agency called for a redoubling of international aid for the 480,000 refugees, 60 per cent of the children, who have fled to Bangladesh since Aug?25 to escape the violence. || ||A Myanmar government spokesman rejected the accusation of crimes against humanity, saying there was no evidence.

Myanmar is committing crimes against humanity in its campaign against Muslim insurgents in Rakhine state, Human Rights Watch said on Tuesday, calling for the UN Security Council to impose sanctions and an arms embargo.

The UN Security Council and concerned countries should impose targeted sanctions and an arms embargo, it said.

The UN refugee agency called for a redoubling of international aid for the 480,000 refugees, 60 per cent of the children, who have fled to Bangladesh since August 25 to escape the violence.

A Myanmar government spokesman rejected the accusation of crimes against humanity, saying there was no evidence.

The US government, which has worked hard to establish close ties with Myanmar's civilian government in the face of competition from strategic rival China, did not comment directly on the Human Rights Watch charge.

However, a spokeswoman said, "We are closely monitoring the situation and the facts on the ground as they continue to unfold.

"We are deeply troubled by reports of extrajudicial killings, sexual violence, and burning of Rohingya villages by security forces and non-Rohingya individuals."

US Deputy Secretary of State John Sullivan told the US House Foreign Affairs Committee that the US ambassador to Myanmar would visit the border of Rakhine, to look into the crisis "within the next two days."

Myanmar has also rejected UN accusations that its forces are engaged in ethnic cleansing against Rohingya Muslims in response to coordinated attacks by Rohingya insurgents on the security forces on August 25.

Refugees arriving in Bangladesh have accused the army and Buddhist vigilantes of trying to drive Rohingya out of Buddhist-majority Myanmar.

"The massacres of villagers and mass arson driving people from their homes are all crimes against humanity."

Myanmar, also known as Burma, says its forces are fighting insurgents responsible for attacking the police and the army, killing civilians and torching villages.

The International Criminal Court defines crimes against humanity as acts including murder, torture, rape and deportation "when committed as part of a widespread or systematic attack directed against any civilian population, with knowledge of the attack".

Government spokesman Zaw Htay said no Myanmar government had ever been as committed to the promotion of rights as the current one.

"Accusations without any strong evidence are dangerous," he told Reuters. "It makes it difficult for the government to handle things."

A coordinating group of aid organisations said the total number of refugees who have fled to Bangladesh since August 25 had been revised up to 480,000 after 35,000 people in two camps were found to have been missed out of the previous tally.

"The massive influx of people seeking safety has been outpacing capacities to respond, and the situation for these refugees has still not stabilised," Adrian Edwards, a spokesman for the UN High Commissioner for Refugees, said in Geneva.

"UNHCR is calling for a redoubling of the international humanitarian response in Bangladesh."

The violence and the refugee exodus is the biggest crisis the government of Nobel peace laureate Suu Kyi has faced since it came to power last year in a transition from nearly 50 years of military rule.

Myanmar regards the Rohingya as illegal immigrants from Bangladesh and bouts of suppression and violence have flared for decades. Most Rohingya are stateless.

Suu Kyi has faced scathing criticism and calls for her Nobel prize to be withdrawn.

She denounced rights violations in an address to the nation last week and vowed that abusers would be prosecuted. She also said the government was trying to determine why so many people fled.

Seven UN experts, including Yanghee Lee, special rapporteur on rights in Myanmar, called on Suu Kyi to meet Rohingya to hear for herself the reasons for their exodus.

"No one chooses, especially not in the hundreds of thousands, to leave their homes and ancestral land, no matter how poor the conditions, to flee to a strange land to live under plastic sheets and in dire circumstances, except in life-threatening situations," they said.

They called on Myanmar to provide humanitarian access to Rakhine state, where the military has been restricting entry.

Suu Kyi has little, if any, control over the security forces under a military-drafted constitution that also bars her from the presidency and gives the military veto power over political reform.

Myanmar has seen a surge of Buddhist nationalism in recent years, and the public is supportive of the campaign against the insurgents.

Since Sunday, the army has unearthed the bodies of 45 members of Myanmar's small Hindu community who authorities say were killed by the insurgents soon after the violence erupted.

The Arakan Rohingya Salvation Army, which has claimed attacks on the security forces since October, denied killing the villagers.

Some Hindus have fled to Bangladesh. Others have taken refuge in Myanmar towns, accusing the insurgents of attacking them on suspicion of being government spies.