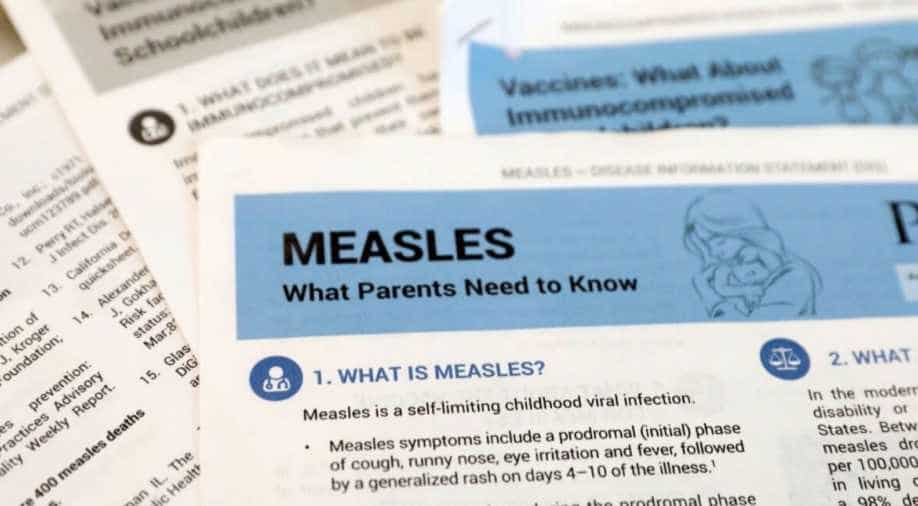 In all, 35,319 suspected measles cases were reported in January, including 3,000 that were laboratory confirmed, and 156 deaths. Ninety-one per cent of the cases and 97 per cent of the deaths were children under the age of five. Photograph:( AFP )

"Measles cases have been increasing in all provinces since the end of July 2021," WHO spokesman Christian Lindmeier told reporters in Geneva.

In all, 35,319 suspected measles cases were reported in January, including 3,000 that were laboratory confirmed, and 156 deaths. Ninety-one per cent of the cases and 97 per cent of the deaths were children under the age of five.

Lindmeier stressed that the measles-related deaths were likely underreported and the numbers were expected to swell.

"The rapid rise in cases in January suggests that the number of deaths due to measles is likely to increase sharply in the coming weeks," Lindmeier said.

Measles is a highly contagious disease caused by a virus that attacks mainly children. The most serious complications include blindness, brain swelling, diarrhoea, and severe respiratory infections.

The latest surge in cases comes as Afghanistan is in the grip of a humanitarian disaster, worsened by the Taliban takeover in August -- when Western countries froze international aid and access to assets held abroad.

The United Nations has warned that half the country is threatened with food shortages.

The best protection against measles is broad vaccination, with the WHO recommending that countries ensure at least 95-per cent vaccination coverage -- a difficult goal in the Afghan context.

Watch | Women's activism grows in Afghanistan with Taliban in power

Lindmeier said the WHO and its partners had been working to scale up their measles surveillance capacities and provide support for things like lab testing and immunisation campaigns.

They have also been providing Vitamin A supplements, which are important to help reduce sickness and death from measles, reaching 8.5 million children in a nationwide campaign last November.

The WHO, Lindmeier said, was now working towards a larger measles vaccination drive starting in May, aimed at reaching more than three million children.