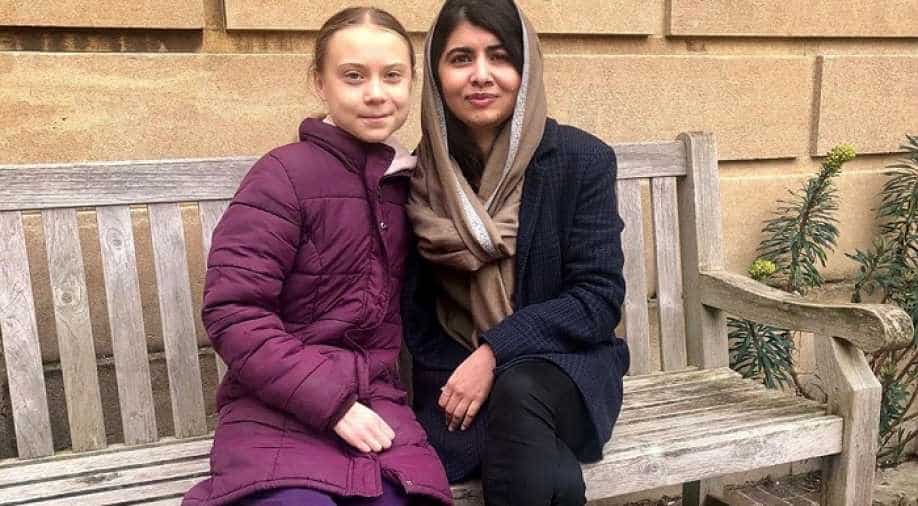 22-year-old Yousafzai posted a photo on Instagram of herself and Thunberg.  Photograph:( Reuters )

22-year-old Yousafzai posted a photo on Instagram of herself and Thunberg sitting on a bench with their arms around each other on Tuesday, with the caption: “Thank you, @gretathunberg” and a heart emoji.

Climate activist Greta Thunberg met Malala Yousafzai at the University of Oxford where the Nobel peace prize winner is a student.

22-year-old Yousafzai posted a photo on Instagram of herself and Thunberg sitting on a bench on Tuesday, with the caption: “Thank you, @gretathunberg” and a heart emoji.

17-year-old Thunberg is in the UK to join a school strike in Bristol on Friday.

Thunberg became a global icon for climate activism after striking school to take part in a protest against climate emergency while Yousafzai shot in the head while campaigning in support of girls be allowed to go to school.

Yousafzai became the youngest to win the noble peace prize her advocacy of education while Thunberg nominated for a Nobel Peace Prize in 2019 and 2020.

The duo met to discuss their activism at Lady Margaret Hall, Yousafzai’s Oxford college. Thunberg also talked to some of the students about the climate crisis and protest.

The college’s master, Alan Rusbridger, posted a photo of Thunberg on his own Instagram and Twitter, saying that he was honoured to host Thunberg and grateful that she found time to talk to the students.

Honoured to host @gretathunberg at @lmhoxford today. grateful she found time to talk to some of our students about science, voting, the limits of protest, divestment, real zero v net zero, and much more pic.twitter.com/FjcNEQDTci