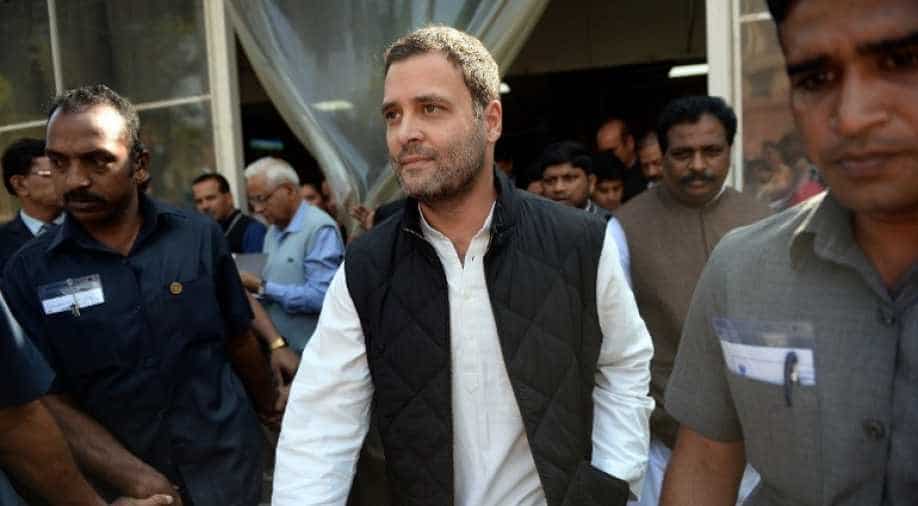 The Congress vice president had yesterday likened the repeated changes in rules to Modi's changing of clothes, and said the message going out was that the Prime Minister's words were 'hollow'. Photograph:( AFP )

Prime Minister Narendra Modi received Rs 45 crore ($6.6 million) from Sahara -- a large business conglomerate in India -- before he became came to power in 2014, according to opposition leader Rahul Gandhi.

At a rally in the western state of Gujarat, the Congress vice-president claimed that during a raid in 2014, taxmen found documents which suggested that Sahara company made multiple payments to Modi between October 2013 and February 2014.

Earlier in the day, Gandhi tweeted that the Modi government is behaving like a "confused" traffic signal exhibiting different colours at the same time. He was attacking the government's 'repeated' changes in the rules regarding deposit of old currency notes in banks.

He posted the picture of a huge traffic signal showing red, yellow, blue and a few other colours at the same time, on Twitter with the caption, "Government orders after demonetisation."

Chief Congress spokesman Randeep Surjewala was equally critical of the latest order. He gave the RBI the sobriquet 'Reverse Bank of India'

The Congress leader had yesterday likened the repeated changes in the rules to Modi's changing of "clothes" and had said that the message going out was that the Prime Minister's words were "hollow".

He was commenting on the new decision of the government under which an amount more than Rs 50,00 in scrapped currency can be deposited only once per account till December 30.

Earlier, the Prime Minister, while announcing the demonetisation decision on November 8, had said old Rs 500 and Rs 1,000 notes could be deposited in banks till December 30 without any questions asked.

Party chief spokesman Randeep Surjewala was equally critical of the latest order, with him giving RBI the sobriquet of "Reverse Bank of India."

Surjewala also posted two cartoons stating "the rules of RBI are like weather, which keeps on changing and therefore, requires hourly bulletins to inform people."

"Daily 'headline management' is the norm for Modi Govt. If Ind. Owner has a choice to pay in cash or cheque, futile to amend the Wages Act," he said in response to the government bringing an ordinance to amend the Payment of Wage Act for allowing business and industrial establishments to pay salaries through cheques or by using electronic modes.

"2ndly, it reflects massive shortage of currency with Modi Govt. Instead of admitting it, it is forcing daily wage earners to stand in bank queues," he said.

Surjewala also latched on to the remarks of Andhra Pradesh Chief Minister Chandrababu Naidu, who after supporting demonetisation initially, did a volte face and said the move has created many troubles for the common man.

"AP CM, NDA ally & head of #DeMonetisation Committee is breaking his head over the mess. Do u need more proof Modiji?", he said.