Afghanistan pullout: An end to US 'forever wars'? 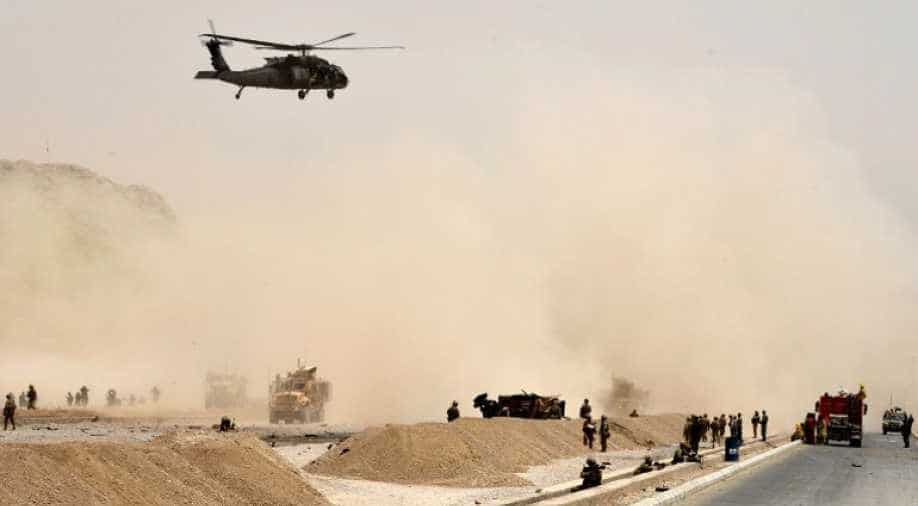 A US black hawk helicopter flies over the site of a Taliban suicide attack in Kandahar on August 2. Photograph:( AFP )

The speed of Joe Biden's pullout from Afghanistan has stunned many, however, it's been four years since Washington gave up on forever wars and turned its attention to the traditional great power rivalries with China and Russia.

It was Biden's predecessor Donald Trump, who came to office in 2017, with promises of quitting Afghanistan, calling the war there a "mess" and a "waste."

The 9/11 attacks shook up the US security establishment, forcing the government into launching a "War on Terror."

Also read | 'I do not trust the Taliban': Biden declares August 31 as final date to end US military mission in Afghanistan

Since then US security establishment has been occupied with combating stateless terror groups like Al-Qaeda and the Islamic State, which has cost the country trillions of dollars in expenditures.

Conflicts in both Afghanistan and Iraq have been characterized by almost endless troop deployments, perpetually high levels of violence, and an inability to end the conflict, defeat the enemy.

How did the endless war start?

Following the 9/11 attacks, the US and NATO allies invaded Afghanistan, with one aim; to get rid of Al-Qaeda's protectors, the Taliban government.

The then George W. Bush took advantage of that, to invade Iraq as well, hoping to topple Saddam Hussein and snuff out a wider threat in the middle east.

Both the attacks proved to be large successes, Al-Qaeda stood weakened, and on the run, Saddam unseated and captured in Iraq.

However, even after these initial successes, the troops had to stay on the ground. Thousands stood deployed in the two countries, hoping to rebuild them,

The initial assaults largely succeeded quickly, with Al-Qaeda fractured and on the run in Afghanistan, and Saddam taken down and captured in Iraq.

But in both cases, the United States and its allies remained on the ground, hoping to rebuild each country, and unable to withdraw with the risk of a return to the pre-9/11 situation hanging in the air.

The end of 'Forever wars'

As of 2020, Trump had overcome resistance and established the groundwork for removing the troops, leaving only 2,500 troops in each country.

Then came Biden. The new President accepted his predecessor's trajectory and promised that the withdrawal will be concluded by August 31, stating that rather than sacrificing another generation of Americans in an unwinnable conflict, the Afghan people must decide their own future.

What changed in the 20 years?

To counter and surpass US military power, China has started building armed bases around the world, including one in Djibouti and several in Asia and the Middle East.

At the same time, Kim Jong Un in North Korea was embarking on the quest to create nuclear weapons capable of threatening the United States.

A pivot was confirmed by Trump's 2017 National Security Strategy and carried forward by Biden.

Also read | Staring at civil war: How bad is the situation in Afghanistan?

"They are determined to make economies less free and less fair, to grow their militaries, and to control information and data to repress their societies and expand their influence."

In the Pentagon's view, counterterrorism doesn't end when the US pulls out of Afghanistan. Although it is turning more toward remote-directed attacks, using air and missile strikes from ships and bases in Afghanistan where Al-Qaeda still operates.

According to Biden, the US is just revising its counterterrorism posture and repositioning resources to meet the threats where they are now.