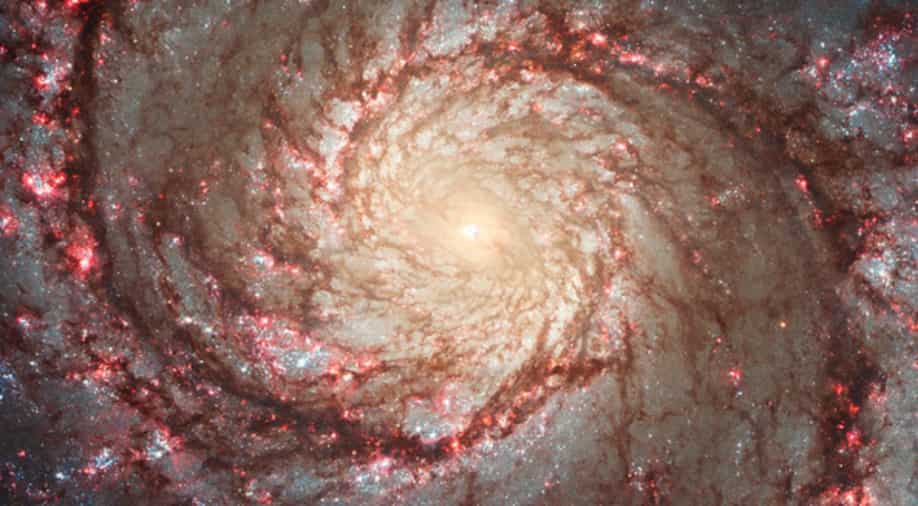 In this picture captured by NASA's Hubble Space Telescope, Whirlpool Galaxy can be seen. It is located about 31 million light-years away in the constellation Canes Venatici. Photograph:( Twitter )

From pink star-forming regions to brilliant blue strands of star clusters, the Whirlpool Galaxy has the traits of a typical spiral galaxy

The US National Aeronautics and Space Administration (NASA) has shared a breathtaking image of the Whirlpool Galaxy’s curving arms.

From pink star-forming regions to brilliant blue strands of star clusters, the Whirlpool Galaxy has the traits of a typical spiral galaxy.

The Whirlpool Galaxy, which is located about 31 million light-years away in the constellation Canes Venatici, is also known as M51 and has been captured by the Hubble Space Telescope.

Round and round we go…

Let yourself be whisked away by the Whirlpool Galaxy’s curving arms, pink star-forming regions, and brilliant blue strands of star clusters. Explore #GalaxiesGalore with @NASAHubble on @Tumblr: https://t.co/F2kzCVAYBt pic.twitter.com/zVUKShxrEB

After NASA shared the image, a Twitter user commented ''What a beauty, can't divert my eyes!''

Another Twitter user wrote in the post's comments ''The Whirlpool Galaxy is an interacting grand-design spiral galaxy with a Seyfert 2 active galactic nucleus.''

The post shared by the US space agency has received over 14,000 likes and more than 1800 retweets.

It comes after US President Joe Biden met Japanese Prime Minister Fumio and said that NASA will welcome Japanese astronauts aboard the gateway.

“In recent years, the alliance between Japan and the United States has grown stronger, deeper, and more capable as we work together to take on new challenges – just as important as the opportunities – of a rapidly changing world,” said Biden.

''A great example of this: We viewed Japan's lunar rover... a symbol of how our space cooperation is taking off, looking towards the Moon and to Mars.''

''And I'm excited about the work we'll do together on the Gateway station around the Moon and look forward to the first Japanese astronaut joining us in the mission to the lunar surface under the Artemis program,'' he added.

“Our shared ambition to see Japanese and American astronauts walk on the Moon together reflects our nations’ shared values to explore space responsibly and transparently for the benefit of humanity here on Earth,” said NASA Administrator Bill Nelson.

“With this historic announcement, President Biden is once again showing nations throughout the world that America will not go alone but with like-minded partners. Under Artemis, it’s our intention to invest in and explore the cosmos with countries that promote science, economic opportunity, and a common set of shared values.”