Fitting on a fingertip: Newly-discovered chameleon could be world's tiniest reptile 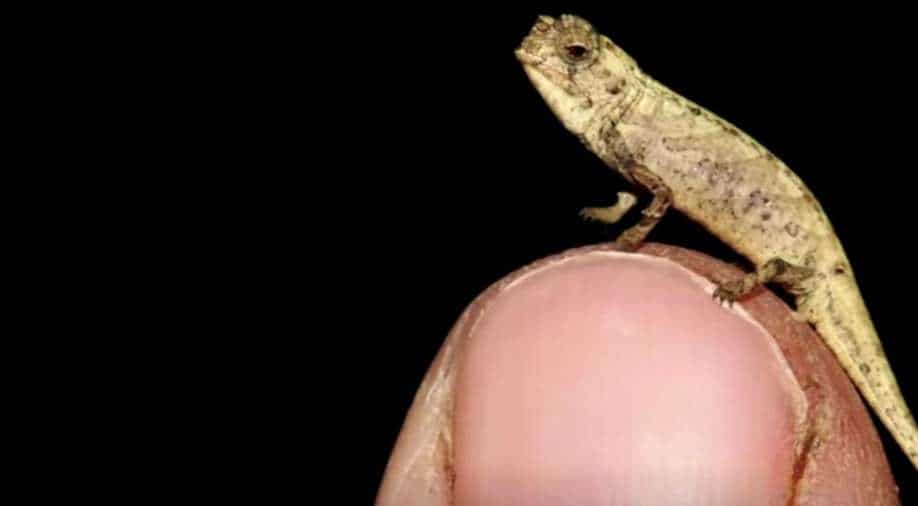 Scientists may have found the smallest reptile on this planet as they discovered a sunflower seed-sized subspecies of a chameleon.

A German-Madagascan expedition team in Madagascar found two miniature lizards, one male and the other female.

The male Brookesia nana or nano-chameleon's body is only 13.5 mm (0.53 inches) long, which is smallest of all the roughly 11,500 known species of reptiles, the Bavarian State Collection of Zoology in Munich was quoted as saying by news agency Reuters.

With a total length of 29 mm, the female chameleon is larger, the research institute said.

It also said that despite serious efforts, scientists were not able to find any more specimens of the new sub-species.

The species' closest kin is the slightly longer Brookesia micra, whose discovery was announced in 2012.

Researchers assume that the lizard's habitat is small as generally happens with identical subspecies.

Deforestation and habitat degradation threaten this tiny reptile's future, according to the researchers. However, the region where these chameleons were found was recently designated a protected region by the Malagasy government.

"The nano-chameleon's habitat has unfortunately been subject to deforestation, but the area was placed under protection recently, so the species will survive," said Oliver Hawlitschek, a scientist at the Center of Natural History in Hamburg in a statement.

They may soon be listed as critically endangered by the International Union for Conservation of Nature.