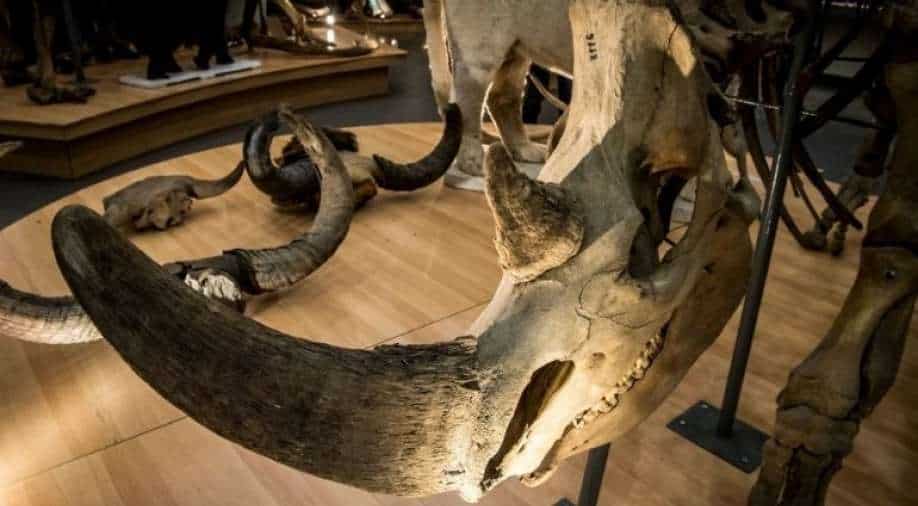 The skull of the extinct woolly rhinoceros (Coelodonta antiquitatis) is seen exhibited at the Mammoth Museum in the city of Yakutsk on November 30, 2018. 75% of the world's known mammoth graves and other representatives of the mammoth fauna with preserved Photograph:( AFP )

Scientists have thawed a woolly rhino who remained frozen in Siberian permafrost for at least 25,000-40,000 years.

Scientists have thawed a woolly rhino who remained frozen in Siberian permafrost for at least 25,000-40,000 years.

The remains of the young wooly rhino were unveiled to Russian press on Tuesday after scientists from Yakutsk were able to successfully catalogue the beast.

Dr Valery Plotnikov, the chief researcher at Mammoth Fauna Study Department, Academy of Science of the Republic of Sakha told East 2 West News that this level of preservation is “unique”.

Scientists claim that the rhino was very well fed at the moment of his death, implying that it was a healthy animal, whose hazel-coloured hair remained a guess based on ancient cave painting before being recently proven.

Yakutia is one of the world’s coldest regions, and is home to a treasure trove of preserved specimens. Earlier, a giant wolf head was found in the area.

Plotnikov also claimed that the animal’s under-skin fat was preserved in the form of a powder.

Earlier, the team had found a rhino’s horn. Now, they believe that the horn belonged to the recently thawed animal found on site. The horn was found by a local resident in August 2020.

The sex of the animal is yet to be ascertained, but scientists have already named him on the place where he was found - Abyisky.

The hippo is suspected to have died by drowning. It may have been chased by predators into drowning, researchers believe.