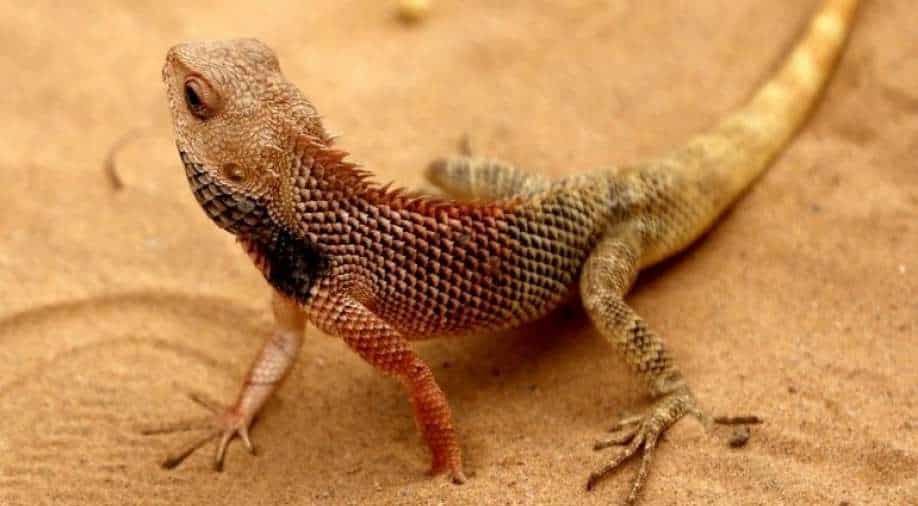 A chameleon walks in the desert near Pushkar, in the Indian state of Rajasthan on July 2, 2018. Photograph:( AFP )

Dozens of chameleons deemed protected were discovered in a suitcase in Vienna.

The chameleons are now being nursed back to health, after being found by Vienna airport authorities.

The suitcase appeared suspicious on X-ray, after which security personnel decided to further scrutinise it.

They found 74 chameleons hidden in socks and boxes in the suitcase.

On the black market, these protected chameleons would sell for about 37,000 euros or $44,970, according to officials.

Soon after discovering the suitcase, a 56-year-old man who was travelling from Tanzania was arrested.

The man has not been identified by the police so far, and he could face a fine of up to 6,000 euros, as claimed by the finance ministry.

The ministry added how the animals are good at camouflaging themselves, but that they could not outsmart the X-ray machine.

"[Chameleons] can camouflage themselves well... but they ultimately did not outsmart the X-Ray machine," the ministry revealed in a statement.

Soon after the discovery, the animals were sent to Vienna’s Schönbrunn Zoo, where they were put under observation by specialists.

Out of the 74, three chameleons died during the journey. They are aged between one-week to adult chameleons.

Experts from the zoo claim that the animals come from Usambara Mountains in Tanzania.

"According to the zoo's experts, they come from the Usambara Mountains, a currently very rainy and cool region in Tanzania," BBC cited the finance ministry as saying.

As of now, the animals are under the care of specialists at the zoo.