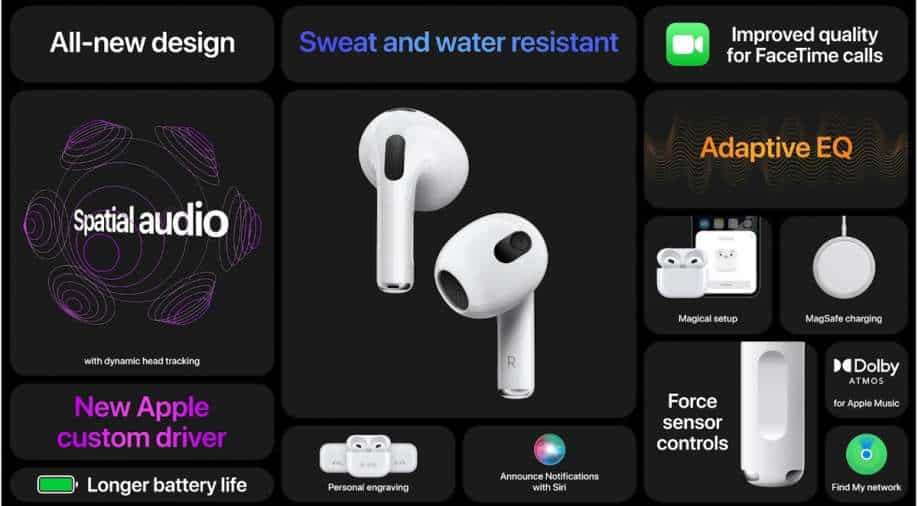 The earbuds will be available in more than 26 other countries and regions starting October 26 Photograph:( Agencies )

Apple launched its third-generation AirPods at its ‘Unleash’ event with a redesign, which is similar to the AirPods Pro.

The new Airpods comes with sweat and water-resistant, along with spatial audio. They also come with adaptive EQ as well, which was earlier seen on Apple AirPods Pro as well.

Unlike the earlier model, the Apple AirPods (3rd Generation) come with an upgraded design with shorter stems to provide a better grip and improved ergonomics.

The next-generation AirPods also come with a wireless charging case as standard that supports Apple's MagSafe.

The company is putting a big emphasis on spatial audio and Dolby Atmos music mixes with the new AirPods. They’ll support the same head-tracking capabilities as the AirPods Pro and AirPods Max, which also apply when watching video.

Already seen by many as the champion of voice call quality, Apple claims to have further improved microphone performance on the latest AirPods. They “feature AAC-ELD, a superior speech codec that offers full HD voice quality, providing clear, natural communication for FaceTime calls.”

The new AirPods also include a skin-detect sensor that is claimed to help accurately discern if the earbuds are in the ear or in a pocket or on a table and pause playback when removed.

On the battery performance, Apple claims that the AirPods (3rd Generation) can deliver up to six hours of listening time and up to four hours of talk time.

Furthermore, the new AirPods has been claimed to deliver about an hour of battery life in just five minutes of charging. Users will also get 30 hours of total listening time with four additional charges in the case.

The earbuds will be available in more than 26 other countries starting October 26.

Apart from the new AirPods, Apple also brought the HomePod mini in Blue, Orange, and Yellow colours in addition to White and Grey. The new colour options will be available through the Apple Online Store and through retailers in November.

Apple also announced new subscription-based music service called ‘Apple Music Voice’ that will available at $4.99 in the US a month, while the Indian users have to shell out Rs 49.

It will sit alongside the existing Individual and Family plans and will be available for access across all Apple devices for one user account.