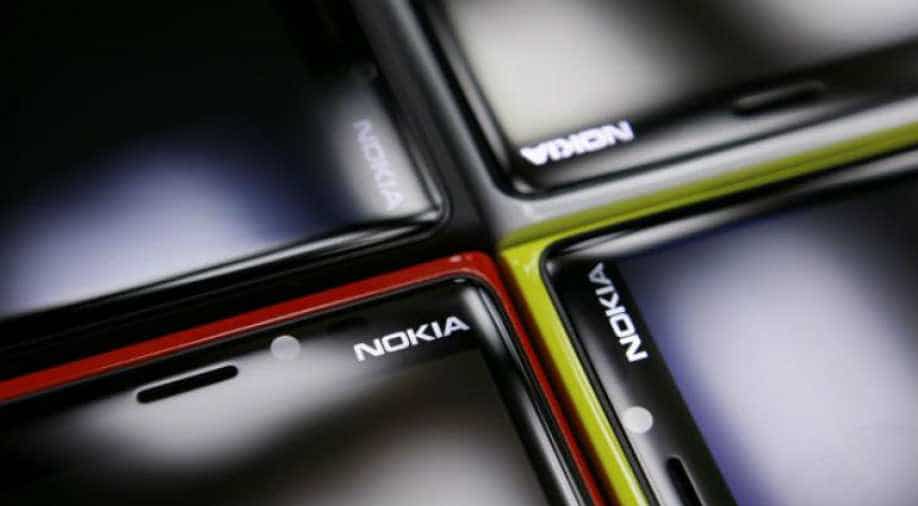 Nokia Lumia smartphones are pictured in a shop Photograph:( Reuters )

Apple has settled a patent dispute with Nokia and agreed to buy more of its network products and services. ||Apple will also resume sales of Nokia's digital health products in retail and online stores.

Apple has settled a patent dispute with Finnish telecom equipment maker Nokia and agreed to buy more of its network products and services, sending Nokia shares up 7 per cent.

The deal means Nokia will get bigger royalties from Apple for using its mobile phone patents, helping offset the impact of waning demand for its mobile network hardware.

Such legal battles are common in the industry but can drag on for years and analysts had not been expecting such a quick resolution to the dispute that started in December.

Under the deal announced in a joint statement from the companies on Tuesday, Nokia will also supply network infrastructure products to Apple, and Apple will resume sales of Nokia's digital health products in retail and online stores and look at further collaboration in health.

Digital health is one of the areas Nokia is targeting as it tries to develop new businesses to offset the industry-wide slump in demand for network equipment. Last year, Nokia bought France's Withings S.A., a small firm with products such as activity trackers and baby monitors built on digital platforms.

"There could emerge big future value from this as Apple could become an important distribution channel," said Handelsbanken analyst Daniel Djurberg, who has an "accumulate" recommendation for Nokia shares.

"I have not given any value so far for Nokia's digital health business, but might apply an option value to it."

"(The deal) involves a business collaboration ... in particular in areas of IP and optical equipment, which is quite key to webscale players when they build their data centers," he said. "It's a good deal, a multi-year licensing deal, and I love it that it has an industrial deal and aspect to it."

Under the patent license agreement, Nokia will receive a "significant" upfront cash payment and additional revenues from Apple starting from the current quarter. The companies did not give further details but analysts said the revenue was likely to be far higher than a previous deal.

Inge Heydorn, fund manager at Sentat Asset Management, said it was a smart move to collaborate on digital health products.

"It's interesting for Nokia in a 5 to 10 year perspective since I think it will be hard to be profitable within mobile infrastructure," said Heydorn, whose firm does not hold any shares in Nokia.

Nokia shares, which fell in December when the patent dispute was announced, jumped to their highest since February 2016 and were up 6.7 per cent at 5.89 euros by 1509 GMT.

A previous patent license contract between the companies expired last year, and both sides took legal action in December. Apple complained of being overcharged and Nokia responded by accusing Apple of violating technology patents.

"(The agreement) moves our relationship with Apple from being adversaries in court to business partners," Nokia's Chief Legal Officer Maria Varsellona said in a statement.

Analysts were surprised by the relatively quick resolution of the dispute between Apple and Nokia.

"Nokia told analysts in April don't calculate on any license revenue from Apple, not even in 2018, so this is a positive surprise. It will also limit Nokia's legal expenses," said Djurberg who said he would probably raise his Nokia estimates.

"For Nokia, it's good news they got this out of the way, but we still have to wait for details about the financial impact," said OP Equities analyst Hannu Rauhala.

Rauhala said Apple might have been willing to settle with Nokia as the US company's patent battle with chipmaker Qualcomm has escalated.

Patent royalties represent only a sliver of Nokia's overall revenue, more than 90 per cent of which comes from telecom network equipment. But licensing payments are highly profitable and the network business is suffering an industry-wide slump.

Once the world's dominant cellphone maker, Nokia sold its handset business to Microsoft in 2014 to focus on its network business and large portfolio of mobile device patents.