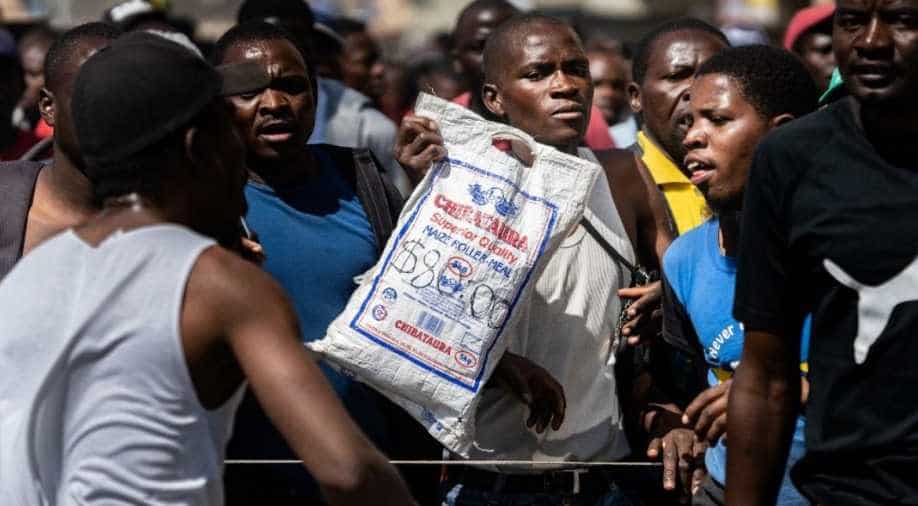 As the country is gripped with fresh protests against economic woes, it feels like history is repeating itself.

Not much has changed for Zimbabwe since the exit of its authoritarian ex-prime minister Robert Mugabe in a military coup in 2017 after year-long protests.

The country is still sinking in the economic decline. For a nation that was once known to be 'Jewel of Africa', Zimbabwe now faces its most dangerous economic crisis in a decade. How is it that a country which almost tasted liberation went back to the regression it was wanting freedom from?

Back in 2017, when the country was rocked with the strike called ''stay- away day", an angry Zimbabwean population demanded civil servants to be paid on time, for officers to stop harassing the common man for cash and the ban on import goods to be lifted.

As the economy collapsed, things looked bleak for Zimbabwe with even the then finance minister Patrick Chinamasa admitting, "Right now we literally have nothing".

Taking things into their own hands, the army put Robert Mugabe on house arrest under the coup d'état carried out by the army. The ruling party Zimbabwe African Nationa Union-Patriotic Front (ZANU-PF) forced Mugabe to resign and elected the party's senior official Emmerson Mnangagwa as it's president.

People rejoiced in the streets of the nation's capital Harare thinking that their economic woes and tryst with corruption and autocracy was long gone only to be proved terribly wrong.

If Mugabe was accused of being a dictator, Emmerson Mnangagwa now finds himself under the same fire.

While he promised the nation to put an end to corruption, human rights violations, economic mismanagement, widespread unemployment and fascism, Zimbabwe hasn't experienced any life-changing development.

As the country is gripped with fresh protests against economic woes, it feels like history is repeating itself.

Protestors from Harare are being silenced with batons, whips and tear gas. Dozens lie wounded on the streets while some are being arrested. Zimbabwe police have released an official statement banning the protests and warned that anyone taking part in the protests would be "committing a crime". Since when did it become criminal to peacefully demonstrate?

The unprecedented violence and the government's lack of willingness to pay heed to their people's problems is a sharp reminder of the fascism prevalent even now in Zimbabwe.

Though Mnangagwa said that he is open to national dialogue, the abduction of political activists and blood on the streets tell a different story. Prominent members of the opposition have been targeted with armed groups including Movement for Democratic Change (MDC) strategist, Tendai Biti.

However, violence seems to be the least important of the problems for most Zimbabweans right now as they go days without having meals and struggle with eighteen hour-long power cuts.

Industries function at night when electricity gets restored for a few hours. Freshwater taps run only once a week.

Zimbabwe, that was once known to be the breadbasket of Africa, now has 5 million victims of food shortage who go days without eating one proper square meal. The government's systematic destruction of the agricultural sector by seizing white commercial farms has left the country with no bread and grains to eat.

The lack of food is making it worse for the population to deal with health epidemics like cholera coupled with a dilapidated, broken health system.

Fuel prices have skyrocketed despite its shortage.

Triple-digit inflation takes us back to 2009 when the country went through hyperinflation and was forced to ditch it's own currency; changing to the US dollar.

Despite the horror happening in Zimbabwe, the international community has maintained a stoic silence. No person in power, no country has stepped up to condemn the violence that has ensued in a nation that hasn't known democracy for the longest ever time.

Over the past months, the situations in Hong Kong and Afghanistan have drawn the attention of many European nations but Zimbabwe isn't even being talked about on our timelines.

UK and Europe must stand for the innocent citizens of Zimbabwe and hold Emmerson, a leader they’d backed during the 2017 years elections, accountable for his failed, undemocratic socio-economic policies.

International actors including the UN must put a united front to demand Mngagwe to immediately withdraw the use of excessive police force and exercise its constitution within democratic norms.

Africa, as a united continent, must offer solutions to kickstart a formal justice serving process.

Negotiations between the main political players of Zimbabwe is unlikely to happen without the intervention of the international community.

Zimbabwe cannot survive alone at this point. It surely needs help to heal the nationwide trauma it's dealing with and change its path to liberation from dictatorship and decline.

*(Dhriti Saran is an editorial intern with WION)