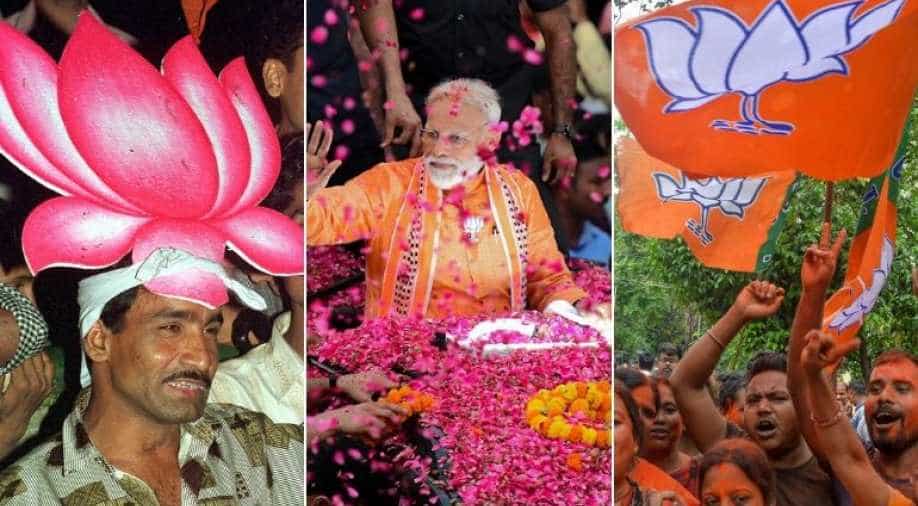 Caste-based opportunistic alliances in 2019 have failed to pin down the BJP and the Narendra Modi-Amit Shah duo.

The results for 2019 Lok Sabha elections are out. BJP is back with a thumping majority and Modi wave 2.0 has gripped the country.

Results have panned out as per the exit polls. What Rajiv Gandhi, Narasimha Rao and Atal Bihari Vajpayee could not achieve, has been accomplished by Narendra Modi. In 2014, development had trumped caste and BJP swept the Hindi heartland.

Similarly, caste-based opportunistic alliances in 2019 have failed to pin down the BJP and the Narendra Modi-Amit Shah duo.  The development agenda, Modi’s persona and Shah’s organisational skills have beat caste again. As of early evening, the BJP has crossed the halfway mark on a standalone basis, leading in 298 seats. The Congress is struggling to score a half-century again, leading in just 51 seats.

The Modi-Shah duo scripted this victory well in advance. Minor losses in UP (-14) were made up with gains in Bengal (+17) and Odisha (+5).

After winning largely on the support of the middle and rich class, the duo made serious inroads into the poor and lower classes through schemes like Jan Dhan, PMAY, Ujjwala, Ayushman and Swachch Bharat, among others.

The duo knew that the Mahagathbandhan would pose a threat in UP. Hence, they further broadened NDA’s social base in UP by bringing in the Nishad Party. To compensate for losses in UP, the party drew a comprehensive strategy to win seats in Bengal and Odisha.

In Bengal, they saw an opening due to the minority appeasement politics of Mamata. In Odisha, the 19-year anti-incumbency of Naveen Patnaik was targeted. Modi and Shah’s rallies were also planned accordingly. About 40 per cent of Modi’s rallies and roadshows were planned in UP, Bengal and Odisha.

Disgruntled leaders from BJD (Jay Panda) and TMC (Mukul Roy) were brought on board.

Modi continues to be the trump card for NDA. As per CSDS survey, the preference for Modi over Rahul has increased to 46 per cent as compared to 45 per cent in 2014. This, despite the much-vaunted, so-called increase in Rahul Gandhi’s appeal.

The Modi factor has increased from 27 per cent to 32 per cent in 2019, as per this survey. Nearly 32 per cent of BJP voters would not have backed the party if Modi was not their PM candidate. That is why BJP centered the campaign around him #ModiHaiToMumkinHai (it is possible if there is Modi) and #PhirEkBaarModiSarkar (another time, Modi government).

The two states that were key to BJP’s fortunes — Maharashtra and Bihar — where NDA won 73 out of 88 seats in 2014, were also tackled by Shah with maturity. BJP was facing the ire of disgruntled allies and trouble in seat-sharing with Nitish and Uddhav. For Shah, it is only about winning — at any cost.

He showed amazing accommodation skills, giving equal seats to these partners and keeping their egos in good humour. Result: NDA has swept Maharashtra and Bihar. (78,+5).

It’s not only about Modi and Shah. Party workers, 10 crore at last count, are the eyes and ears of the organisation. They provide feedback on government schemes, probable candidates as well as play a key role in reaching out to the voters with achievements of the government.

Added to this is the RSS workforce, which works relentlessly for the party due to ideological leanings. The party devised a strategy for the Hindi heartland, which it had swept in 2014.

In UP in 2014, Mahagathbandhan had 43 per cent vote share as against NDA’s 43.6 per cent. NDA had won 73 out of 80 seats in 2014. Mahagathbandhan partners could not seamlessly transfer votes to each other.

Congress, too, played the role of spoiler. BJP managed to bring into its fold the Nishad party. Early evening indications suggest that NDA is leading in 59 and Mahagathbandhan in 20 seats.

The biggest news is the upset of Rahul Gandhi, who conceded defeat in Amethi to Smriti Irani.

People voted for Modi as well as Nitish Kumar or the Sushashan babu. Until last reports, NDA was leading in 37 and the Mahagathbandhan in three seats. In Madhya Pradesh, as evident from state election results of 2018, SC-STs moved away from the party to the Congress.

The BJP also had to bear the brunt of upper caste anger against amendment to SC-ST Atrocities Act. Through 10 per cent reservation for economically weaker sections (EWS), BJP managed to assuage the feelings of the upper castes. As per last reports, BJP was leading in 28 and the Congress in just one seat.

In Rajasthan, BJP got a boost with Beniwal, a prominent Jat leader joining the party ahead of the polls. This consolidated Jats and Rajputs vote in favour of the BJP and the party swept all 25 seats again.

In Jharkhand, too, the Magathbandhan failed to make a dent in the NDA’s vote bank despite a good social base of minorities and tribal. BJP was leading in 12 and Mahagathbandhan in two seats, the same as last time in 2014.

The surprise pack is Chhattisgarh, when everybody had written off BJP. It is likely to repeat its performance, sweeping 10 out of 11 seats. It is leading in all ST reserved seats, except Bastar. The OBCs have returned back to the party-fold.

To sum up, BJP’s development agenda trumped caste again! Modi magic, coupled with better management of contradictions in vote bank politics, and stress on nationalism has helped the NDA to return to power comprehensively.