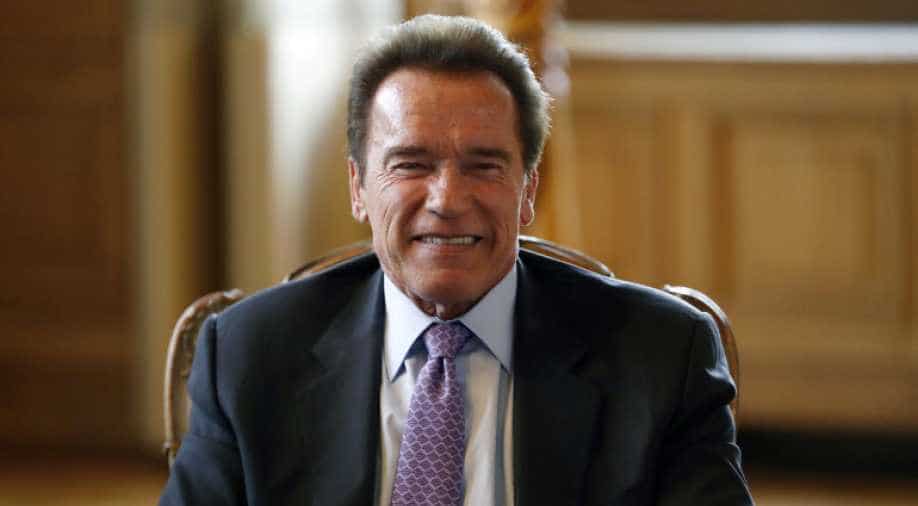 Schwarzenegger the activist has got behind a new documentary at the Cannes film festival by the son of undersea explorer Jacques Cousteau which he also narrates. Photograph:( AFP )

On top of the global R20 network of regional leaders, Schwarzenegger has put together to fight climate change || ||Three of his Hummers run on hydrogen, vegetable oil and bio-diesel and he's hoping to put an electric engine into the fourth

Arnold Schwarzenegger has four Hummers and likes nothing better than getting up at 5 am to ride his Harley Davidson to the beach for breakfast.

Yet "The Terminator" star insists that should not stop him being an environmental evangelist.

"Saving the planet is also about technology," the former California governor told AFP, putting his foot on a chair and wagging a skull-ringed finger to make his point.

Three of his Hummers run on hydrogen, vegetable oil and bio-diesel and he's hoping to put an electric engine into the fourth.

"You know one day soon we are going to have hydrogen-fuelled planes. We can get rid of this dirty diesel tomorrow.

"I hate it when environmentalism comes down to 'you can't do this and you can't do that'. There's a bad habit of shaming, guilt and finger pointing. 'Don't smoke this, don't take a jacuzzi and don't take a plane.' Everything's bad."

Which is why Arnie is giving it an injection of his legendary pumped-up positive attitude.

"We didn't blame anyone" when Schwarzenegger the young bodybuilding Mr Universe was a pin-up of the "physical fitness movement 40 years ago", he said.

"We didn't say he's fat or she's got a big ass. We celebrated the body."

Now on top of the global R20 network of regional leaders he has put together to fight climate change,

Schwarzenegger the activist has got behind a new documentary at the Cannes film festival by the son of undersea explorer Jacques Cousteau which he also narrates.

"Wonders of the Sea 3D" will make "people fall in love with the ocean", he declared. "And if they love it they will protect it," he said.

"The oceans give us half the food we eat and half the oxygen we breathe and we better protect that. Seven million people die every year because of pollution."

Even such apocalyptic statistics cannot survive long in the white heat of the Austrian-born star's can-do charisma.

"Look, we can do it, we can save the planet with people power and positive attitude.

"If you want people to change you got to make them feel good about it.

"I had a very clear vision as a kid of what I was going to do," he recalled.

It all came true, and then some.

"But I never thought I would have the biggest movie of the year with 'Terminator 2', and that I would be doing comedy or politics."

Nor has the march of time dimmed his optimism.

Asked about turning 70 in July, Schwarzenegger joked, "Are you asking because you want to send me a birthday gift? I like Montecristos (cigars), No. 2s."

Schwarzenegger looks a good two decades younger, and says his secret is that he "works out every day and I really love my life.

"One month I make a movie, fly to South Africa for a bodybuilding conference, pump up some students and get my eighth honorary degree.

"Then you make a few more million dollars in a real estate deal and get up at 5 am and ride your motorcycle to Santa Barbara for breakfast. How can you not feel good about your life?"

"Imagine not enjoying what you are doing. That's terrible. That's the reason for depression," he said.

Only when you mention Donald Trump does Schwarzenegger's incredible positivity flicker.

Specifically "The Apprentice" television show, whose ratings plunged when Arnie took over when Trump left to run for the US presidency.

Trump blamed Schwarzenegger, tweeting that Schwarzenegger "isn't voluntarily leaving 'The Apprentice', he was fired by... his bad ratings".

Arnie said viewers were put off by its association with Trump, the show's executive producer.

That the two men find themselves at war over climate change has added extra edge.

Trump is "back in the Stone Age" on the environment, Schwarzenegger told AFP.

"When I hear he wants to bring coal back.... The next thing he'll want to bring horses and buggies (carts) back," he said.

His assessment of his fellow Republican's time in the White House is withering: "So far nothing has got done since he became president."

Yet he won't be tempted by talk that it is time to call in the Terminator. "Look, I wish Trump good luck. We should support the things he wants to do that are good."

But if the call ever came? "I was not born in America (so can't be its head of state). But if I had been, yes, I would run for president. That's clear."