'You are the living gods': Indian Army thanks first responders at CDS chopper crash site 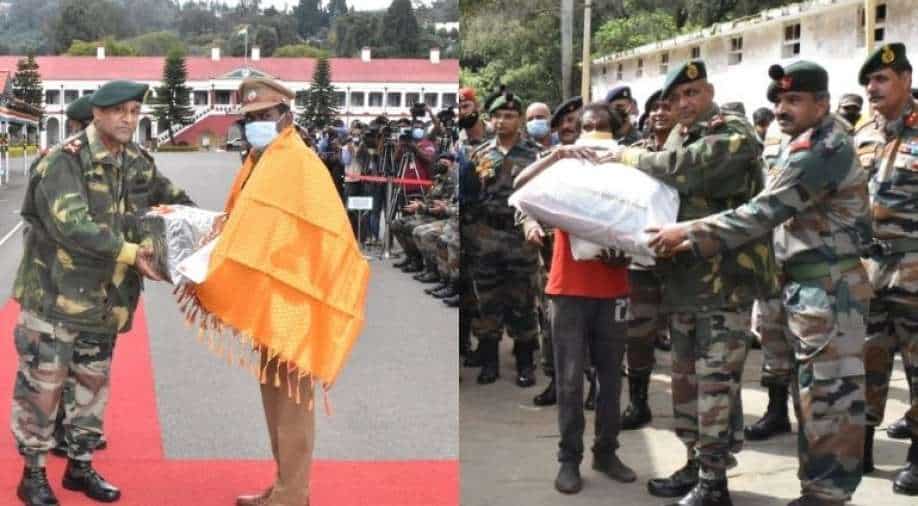 The Indian Army provided letters of recognition, medals, and shawls to all officials involved in the rescue and relief. Whereas, first responders from the village (tea estate workers) were provided rations, winter clothes, blankets, and emergency lamps.  Photograph:( WION )

Pointing out how the villagers had used everything at their disposal to aid search and rescue, officer thanked them for having used blankets, bedsheets, medicines, buckets of water to extricate the passengers and material.

The chopper carrying India’s Chief of Defence Staff, Gen Bipin Rawat, his wife and 12 others crashed into a hillside in the Nilgiris district on Wednesday, December 8th. 13 lives were lost in the crash, and the lone survivor, Group Captain Varun Singh, continues to remain in critical care.

Touring the Nilgiris, Lt Gen A. Arun, General-Officer-Commanding, Dakshin Bharat Area, led the felicitation events, interacted with the first responders and authorities. The Madras Regimental Center (MRC), Defence Services Staff College (DSSC), Army Hospital, and the Nanjappan Chatram village were among the locations that he visited to formally thank and recognise the selfless service of the common public and authorities.

Among those felicitated and recognised were officials from the police, fire services, forest department, health, ambulance services, revenue, electricity board, first responders, Coonoor Shopkeepers association, etc. Speaking at the MRC, home to the Indian Army’s oldest regiment, Lt Gen Arun expressed his heartfelt thanks and gratitude to the entire Tamil Nadu government machinery. He emphasised the most brutal challenges and circumstances (terrain, weather, flaming chopper), under which the search and rescue were carried out.

Being a hillside that is not directly accessible by motorable road, the victims of the crash and their mortal remains had to be carried to the ambulances that were waiting at the nearest accessible roads. Amid the blaze and heat of the explosion, the local residents and authorities managed to conduct a search and rescue. As first responders, local residents not only reached the crash site, but also alerted the authorities instantly.

"@tnpoliceoffl health, revenue, EB, forest dept everyone helped at crash site. All men in uniform told me that d rescue was impossible without you villagers of Nanjappan Chatram. Pilot Grp capt Varun Singh is alive, fightng bcoz of you, you wer living Gods for the 14 ppl" he says pic.twitter.com/hbvFnMljj5

"It would have been impossible to recover the 14 victims from the crashed chopper in time, if not for brave people like you… In any accident, those who step up and help are equal to God.. For the 14 crash victims and their families, you are Living Gods" Lt Gen Arun, expressed in Tamil, in his address to the villagers of Nanjappan Chatram. It was at Nanjappan Chatram, a small settlement of estate workers, near the Coonoor town of Nilgiris district that the tragic chopper crash had occurred, as India's top military leader was headed for the nearby Defence services Staff College, to deliver a lecture.

Thanking the villagers from his heart, on behalf of @adgpi , Lt Gen Arun says in Tamil, "you ppl used ur own clothes, blankets, buckets, water etc and risked life&limb to save the crash victims. Fantastic!"

Pointing out how the villagers had used everything at their disposal to aid search and rescue, he thanked them for having used blankets, bedsheets, medicines, buckets of water to extricate the passengers and material. . "Good Samaritans like you can’t be found anywhere easily. Citizens like you inspire us (Defence personnel) to fight for the motherland.. Ordinary people can’t do what you did…", he extolled the people of the Nanjappan Chatram village.

While serving officials of various departments were appreciated with letters of recognition, medals, medallions and by presenting shawls, the villagers were provided with essential winter supplies, such as rations, winter clothing, blankets emergency lights etc.