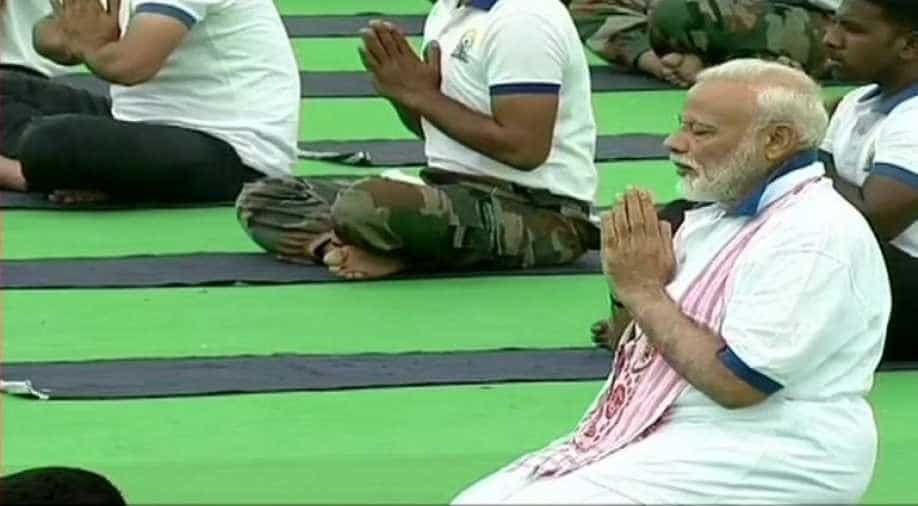 'I extend my good wishes to all of you, in India & across the globe, on the occasion of  #InternationalDayofYoga. Today, lakhs of people have gathered in different parts of the world to celebrate Yoga Day,' PM Modi said.

Prime Minister Narendra Modi on Friday said that ''yoga for heart care'' will be the theme for this year and that world is accepting yoga practices.

Modi addressed around 30,000 people at Prabhat Tara ground in Ranchi on the occasion of International Day of Yoga.

''I extend my good wishes to all of you, in India & across the globe, on the occasion of  #InternationalDayofYoga. Today, lakhs of people have gathered in different parts of the world to celebrate Yoga Day,'' PM Modi said.

''We all know the importance of Yoga very well. It has always been an important part of our culture. But now we all have to take the practice of Yoga to another level,'' PM Modi added.

''I thank people across the world for joining Yoga Day celebrations, world over the first rays of the sun are being welcomed by dedicated yoga practitioners, it is a beautiful sight. I urge you all to embrace yoga and make it an integral part of your daily routine,'' PM Modi said.

"Now, I have to take the journey of modern yoga from the cities to the villages, to the poor and tribal's house. I have to make yoga an integral part of the life of poor and tribal. Because it is poor who gets the most pain due to illness," Prime minister said while addressing an event in Ranchi.

Jharkhand Chief Minister Raghubar Das and various other ministers were present in the event.

Watch: PM Modi performs Yoga along with public at Ranchi

Gates were opened at 3am with free bus service, which started on Thursday night.

A total of 28 display screens have been installed at the venue for live telecast of the event.

Earlier in the day, Yoga guru Baba Ramdev performed yoga along with Maharashtra Chief Minister Devendra Fadnavis and his followers in Nanded.

The first International Day of Yoga was observed all over the world on June 21, 2015, when over 30,000 people including Prime Minister Modi performed yoga at the Rajpath in New Delhi.

The idea of International Day of Yoga was first proposed by PM Modi during his speech at the United Nations General Assembly (UNGA) on September 27, 2014.