World has to move beyond talks on terror: PM Modi in South Korea 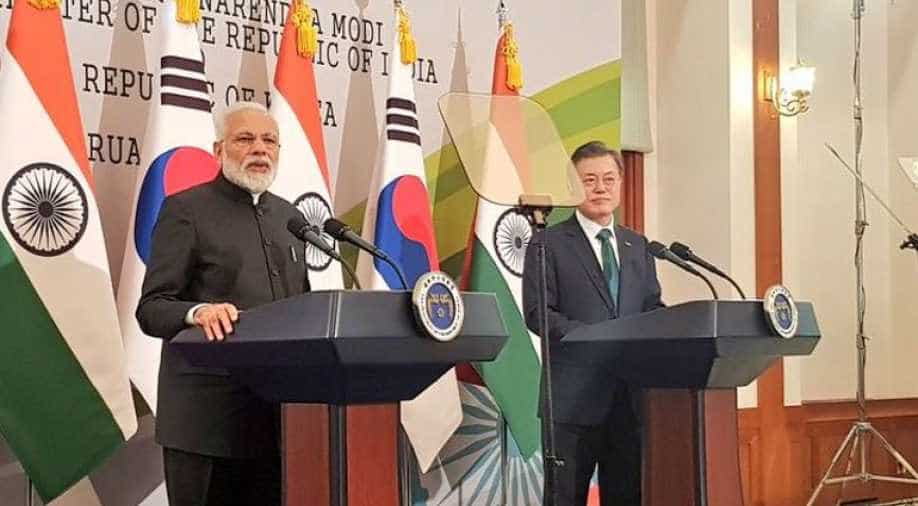 Prime Minister Narendra Modi on Friday called on the world to speak in one voice on the issue of terror and thanked South Korean President Moon Jae-in for his country's support.

While standing alongside President Moon PM Modi said, "I thank President Moon for his support. On counter terror, we will increase cooperation. The world has to move beyond just talks now."

PM Modi emphasised economic cooperation and stated, "the South Korean model is the best for India"

India is among the top 10 trade partners of South Korea and the 6th largest export destination for Korean goods. The trade volume between the two nations reached 21.5 billion dollars for the calendar year 2018 with both aiming to achieve $50 billion trade by 2030. Both sides have also fast-tracked the Comprehensive Economic Partnership Agreement (CEPA).

The Prime Minister further said, "India's Act East and Korea's new southern policy is strengthening and giving depth to the strategic partnership between the two countries".

PM Modi reiterated India's policy on the inclusivity and centrality of the Indo-Pacific and the ASEAN. The MoUs between India and South Korea were signed in the field of trade and industry, startup, communication.

The Prime Minister started his day by paying his respects at the National Cemetery in Seoul.

On day one, Prime Minister Narendra Modi addressed South Korean business leaders, unveiled a bust of Mahatma Gandhi at the Seoul Campus of the Yonsei University and interacted with the Indian community in the country.

Addressing the Indian community in the evening, a permanent fixture in his agenda overseas, he talked about economic reforms brought about by his government and how Goods and Service Tax (GST) united the country economically. He said, "India is the brightest spot for investment in the world".

At the Seoul Campus of the Yonsei University the Prime Minister, in the presence of the South Korean President, unveiled a bust of Mahatma Gandhi. Established in 1885, it is one of the oldest and most prestigious universities in the country.

Speaking at the unveiling event the PM said, "the father of the nation Mahatma Gandhi can show the way in dealing with issues like climate change and terror."

The Prime Minister also gifted a sapling of holy Bodhi tree to the people of Kimhae through the mayor of Kimhae Heo Seong Gon. Kimhae city has a historic connect with India, it is believed that Princess Suriratna of Ayodhya had gone there in 48 CE and married Korean King Suro and started a dynasty. Princess Suriratna is known as Heo Hwang-ok in South Korea.

The First Lady of South Korea, Kim Jung-Sook, visited Ayodhya in November 2018 to participate in the ground-breaking ceremony of the Queen Suriratna Memorial in the city. Gimhae and Ayodhya have a sister-city relationship.