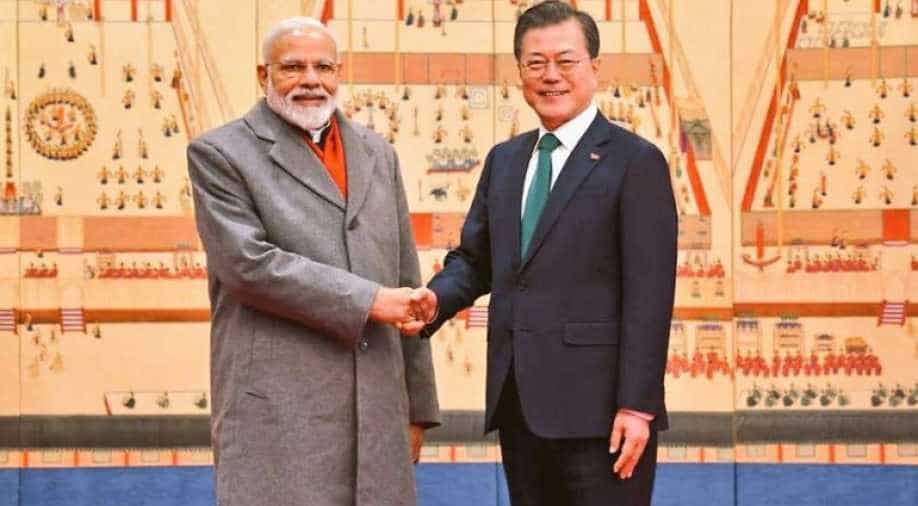 Prime Minister Modi will be conferred Seoul Peace Prize on the second day of his visit to South Korea.

The prize, which was announced by the Seoul Peace Prize Cultural Foundation in October last year in recognition of his dedicated service to international cooperation, global growth, and human development, will be given to PM Modi on Friday afternoon at a brief ceremony.

This is the Prime Minister’s second visit to the Republic of Korea after his state visit in May 2015. Before embarking on the visit the Prime Minister described South Korea as a valued friend with which India shares special strategic partnership initiatives such as ‘Make in India,’ ‘Start-Up India’ and ‘Clean India’.

PM Modi on Thursday gifted a ‘Bodhi' tree sapling to Mayor of Gimhae Heo Seong gon as a mark of close ties between India and South Korea.

Spokesperson of Ministry of External Affairs Raveesh Kumar took to Twitter to inform: “Mayor of #Gimhae Heo Seong gon called on PM @narendramodi in #Seoul. PM gifted a Bodhi tree sapling as a mark of close ties between our two countries.” “Gimhae and Ayodhya have sister-city relationship,” Kumar added.

Mayor of #Gimhae Heo Seong gon called on PM @narendramodi in #Seoul. PM gifted a Bodhi tree sapling as a mark of close ties between our two countries. Gimhae and Ayodhya have sister-city relationship. pic.twitter.com/ES2XBwH7Tx

Speaking on the occasion, the prime minister described it as an honour to unveil the bust of Bapu at Yonsei University. “This becomes even more special because we are doing so at a time when we mark the 150th birth anniversary of Bapu,” the Prime Minister said.

“Through his lifestyle, Bapu showed what living in harmony with nature is, and how one can minimise one’s carbon footprint. He also showed that it is important to leave a clean and green planet for the future generations,” the Prime Minister said.

“India has emerged as a land of opportunities. While we work for realizing the ‘Indian Dream’, we seek like-minded partners. And, among them, we see South Korea is truly a natural partner. India-Korea Business relations have come a long way in the past decade, and especially closer in the last few years,” he said.

“India is among top 10 trade partners of Korea and India is the 6th largest export destination for Korean goods. Our trade volume has reached 21.5 billion US dollars for the calendar year 2018. The negotiations to upgrade the Comprehensive Economic Partnership Agreement have been fast-tracked to achieve the bilateral trade target of 50 billion US dollars by 2030,” he added.