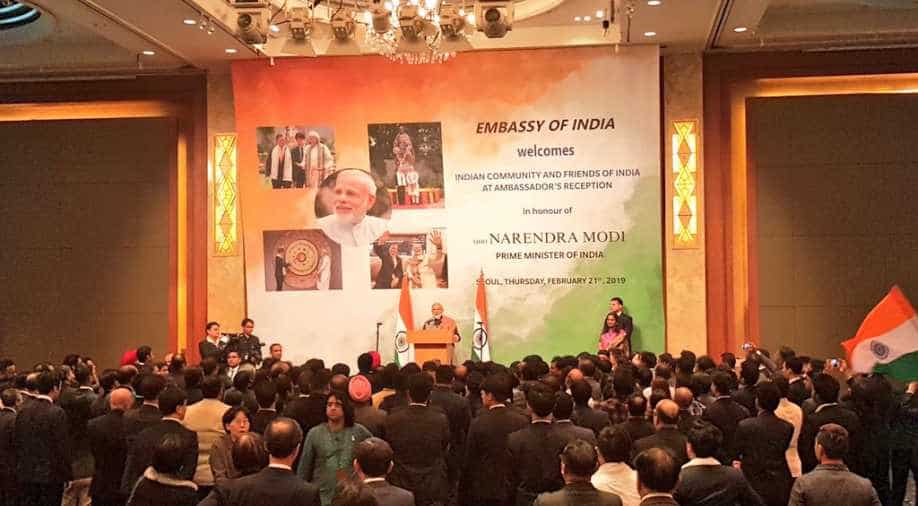 Addressing the Indian community, a permanent fixture in his agenda overseas, Modi talked about economic reforms brought about by his government and how Goods and service tax (GST) united the country economically.

It was a hectic first day for Prime Minister Narendra Modi in South Korea as he addressed business leaders, unveiled a bust of Mahatma Gandhi at the Seoul Campus of the Yonsei University and interacted with the Indian community.

Addressing the Indian community, a permanent fixture in his agenda overseas, Modi talked about economic reforms brought about by his government and how Goods and service tax (GST) united the country economically.

Ending the day on a positive note

PM @narendramodi addresses the vibrant Indian community in #Seoul. Recounts the proactive steps taken by the Government in recent years, including several new initiatives, to take India on a forward trajectory. pic.twitter.com/ytPHVY7Ip3

He said, "India is the brightest spot for investment in the world".

"We will be in the $5 trillion club soon.. and we are hoping we become the top 3 largest economies in next one and half decade," Modi said.

At the Seoul Campus of the Yonsei University, Prime Minister Narendra Modi in the presence of  South Korean President Moon Jae-in unveiled a bust of Mahatma Gandhi. Established in 1885, it is one of the oldest and most prestigious universities in the country.

Modi started the day by addressing South Korean business leaders at the India-Korea Business Symposium and invited them to invest in India saying "red tape" has been replaced by "red carpet".

At the event, he said, "India has emerged as a land of opportunities. While we work for realising the ‘Indian Dream’, we seek like-minded partners. And, among them, we see South Korea is truly a natural partner."

India is among the top 10 trade partners of Korea and India is the sixth largest export destination for Korean goods. India Korea trade volume has reached 21.5 billion Dollars for the calendar year 2018 with both aiming at $ 50 billion trade by 2030. Both sides have also fast-tracked the Comprehensive Economic Partnership Agreement (CEPA)

He said, "The fundamentals of our economy are sound. No other large economy in the world is growing at over 7 per cent year after year" and "Hard policy decisions such as the introduction of Goods and Services Tax have been taken."

He will be also be honoured with the Seoul Peace Prize.