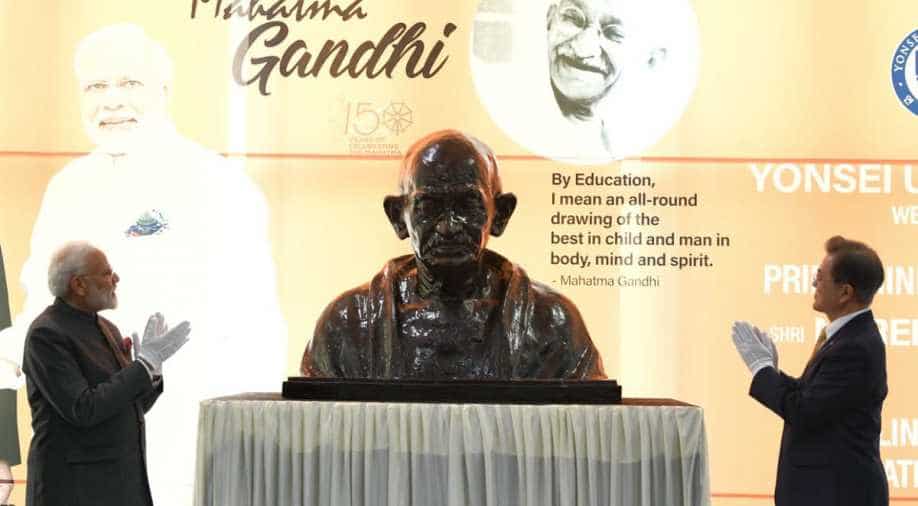 Prime Minister Narendra Modi on Thursday said that values of Father of the Nation Mahatma Gandhi can show the way in dealing with issues like climate change and terror.

Modi was speaking after unveiling the bust of Gandhi at the Seoul Campus of the Yonsei University in the presence of South Korean President Moon Jae-in. Established in 1885, its one of the oldest and most prestigious universities in the country.

The thoughts and ideals of Bapu have the power to help us overcome the menace of terrorism and climate change, two challenges humanity faces in these times, Modi said.

PM @narendramodi speaking at the unveiling of Mahatma Gandhi bust at Yonsei University : The solution to twin challenges of climate change and terrorism facing the world today, could be found in Mahatma Gandhi's life and his philosophy . pic.twitter.com/b9mGyKk1Vy

''On Climate Change,'' PM said, ''Through his lifestyle, Bapu showed what living in harmony with nature is. He also showed that it is important to leave a clean and green planet for the future generations."

Modi also gifted a sapling of Holy Bodhi Tree to the people of Kimhae, through the Mayor of Kimhae Heo Seong Gon. Kimhae city has a historic connect with India since Princess Suriratna of Ayodhya had gone there in 48 CE and married Korean King Suro and started a dynasty. Princess Suriratna is known as Heo Hwang-ok in South Korea. The First Lady of South Korea, Kim Jung-Sook visited Ayodhya in November of 2018 to participate in the ground-breaking ceremony of Queen Suriratna Memorial in the city. Gimhae and Ayodhya have a sister-city relationship.

Earlier in the day he addressed South Korean business leaders and invited them to invest in India saying "red tape" has been replaced by "red carpet".

Modi is on a two-day visit to South Korea from Thursday.

Prime minister had visited South Korea in May of 2015. Moon Jae-in, during a visit to India in July 2018, inaugurated the new manufacturing facility of South Korean major Samsung in Noida which is the largest mobile phone manufacturing plant of the company anywhere in the world.