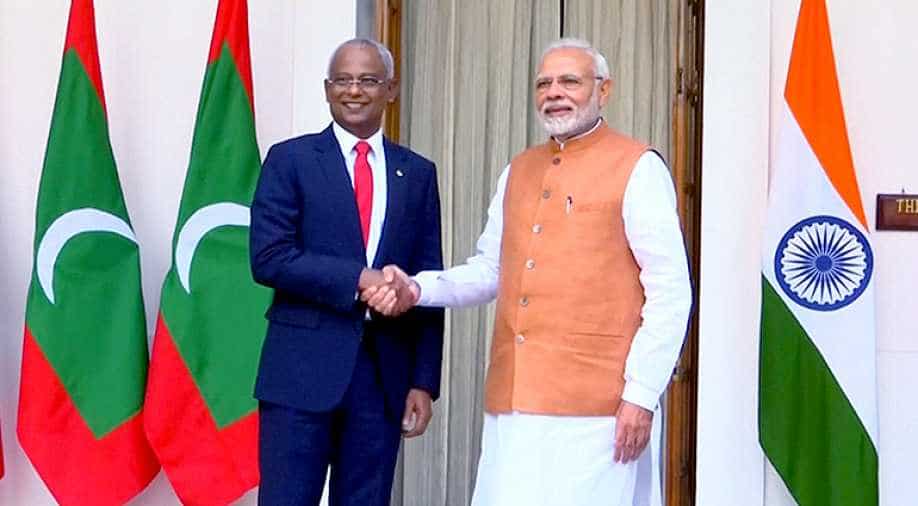 'I am happy to announce, for social and economic development of Maldives, we will provide currency swap, credit with lines of credit worth 1.4 billion dollar,' Modi said in Delhi on Monday.

Maldives and India officially announced the positive reset in their ties with the visit of Maldivian President Ibrahim Mohammed Solih.

While President Solih reaffirmed his government’s "India First" policy and commitment to working closely with India, New Delhi announced a $1.4 billion aid package for the Maldives.

India will provide the cash in the form of budgetary support, currency swap, and concessional lines of credit to fulfil the Maldives' socio-economic development programmes. This was announced by Indian Prime Minister Narendra Modi and Solih during their joint press statement.

"I am happy to announce, for social and economic development of Maldives, we will provide currency swap, credit with lines of credit worth 1.4 billion dollar," Modi said in Delhi on Monday.

Both leaders agreed on the importance of maintaining peace and security in the Indian Ocean region.

Modi announced that both countries "will increase cooperation to maintain stability in the Indian Ocean region" and "security interests of both the countries are interlinked in the region and both will not allowing their respective territories to be used for any activity inimical to the other."

Solih talked of how both countries can strengthen security in the Indian Ocean. "India and Maldives agreed to strength maritime security in Indian Ocean region  coordinated patrolling and aerial surveillance, exchange of information and capacity building," the Maldivian president said.

India will provide a thousand additional slots over the next five years for training and capacity building in diverse fields including judicial, policing and law-enforcement, audit and financial management, local governance, community development etc.

India and Maldives signed four agreements. One was an agreement on the facilitation of visa arrangements which will ease the issuance of visas for the people of both countries. PM Modi noted that the new agreement will address common concerns and ensure that people-to-people contacts are enhanced. President Solih said the agreement will allow many Maldivians who send their children to school in India to be able to accompany them. The agreement also facilitates easier visa arrangements for Maldivian citizens and their families to come to India for medical treatment.

The Maldives is one of the very few countries with which India has a visa-free arrangement.

In an important gesture, President Solih is staying in the Rashtrapati Bhawan as a special guest of President Ram Nath Kovind.

According to the joint statement released by the ministry of external affairs: "This demonstrates the close ties between India and the Maldives, and the warmth and mutual respect between the two governments."

This is President Solih's first foreign visit after entering office.

The visit comes exactly a month after PM Modi's visit to the Maldives on November 17 to take part in President Solih's swearing-in ceremony.

PM Modi was the only head of state invited to take part in the swearing-in ceremony.

India's relationship with the Maldives had suffered under the previous Yameen government who had junked his country's pro-India policy for a pro-China policy.