Watch: This mom elephant is trying to revive offspring struck down by electric wire in India 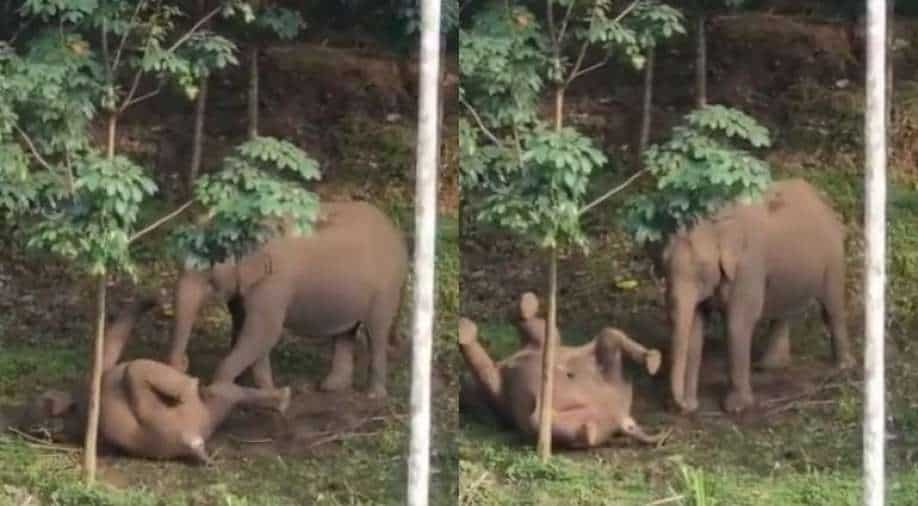 This screengrab from a video, shows a mother trying to revive her child, a three-year-old elephant who died allegedly due to electrocution Photograph:( Twitter )

A heartwrenching video of a mother elephant trying to revive her three-year-old dead calf has gone viral on social media.

The tragic video from Kerala shows a tusker lying down on the ground and groaning in agony after getting electrocuted.

Heart-wrenching! A mother elephant tries to wake a three-year-old dead calf after the tusker came in contact with an electric wire in Palakkad district of the southern Indian state of #Kerala

(Disclaimer: Some viewers may find the video disturbing) pic.twitter.com/RKZ6O3kRfS

The elephant's mother can be seen using its trunk to poke and prod its calf in order to help it get up.

Officials in the forests at Malampuzha near Palakkad district said that the exact cause of the death will be known after the post-mortem.

''There was a live wire that connected to a borewell, and the elephant seems to have come in contact with it,'' said Divisional Forest Officer (DFO) Kurra Srinivas.

Meanwhile, residents said the herd of elephants had entered a private estate where the calf tried to chew the wire of an electric pump and got a shock as a result.

The incident triggered tension in the area with a large number of people gathering to see the dead elephant.

An inquiry has been launched to check whether rules were followed or there were any lapses.

Last year, a pregnant elephant in the same state had died after it was fed a pineapple stuffed with crackers.