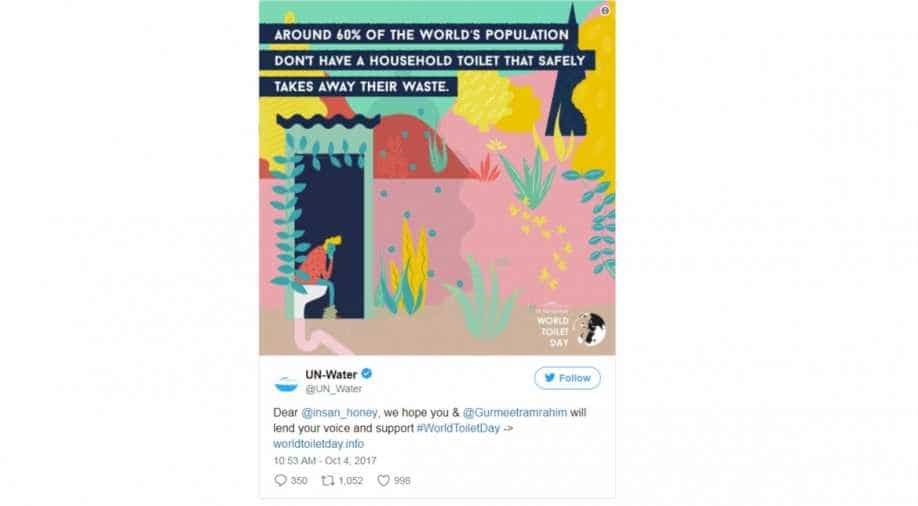 Dera Sacha Sauda chief Gurmeet Ram Rahim Singh and his adopted daughter Honeypreet Insan are all over the internet again-- and not for obvious reasons.

The father-daughter duo was tagged on Tuesday followed by another tweet on Wednesday by the official website of UN-Water -- seeking help from both to voice the cause of health and sanitation on World Toilet Day on November 19. UN-Water's Twitter account tagged only the duo asking them to lend their support.

He was first tagged on Tuesday by UN-Water (Twitter)

The first post read: "Dear @Gurmeetramrahim, can we count on your support to celebrate toilets on November 19 - #WorldToiletDay? http://www.worldtoiletday.info"

While the second post on Wednesday read: "Dear @insan_honey, we hope you & @Gurmeetramrahim will lend your voice and support #WorldToiletDay -> http://www.worldtoiletday.info"

The tweets have now been taken down by the official body but Twitterati had a field day responding to the goof-up:

Hope it turns out to be some kind of badly executed joke abt disposal of poop.https://t.co/YTYb49B0Am

You gotta be kidding me!

Gurmeet Ram Rahim Singh was sentenced to 20 years in jail in August for raping two of his followers. His adopted daughter Honeypreet was arrested yesterday after a month-long chase by the Indian police. She has been arrested on charges of instigating violence in Panchkula after Singh was sentenced by a CBI court. At least 41 people were killed in the violence by his followers and subsequent police action in the states of Haryana and Punjab.