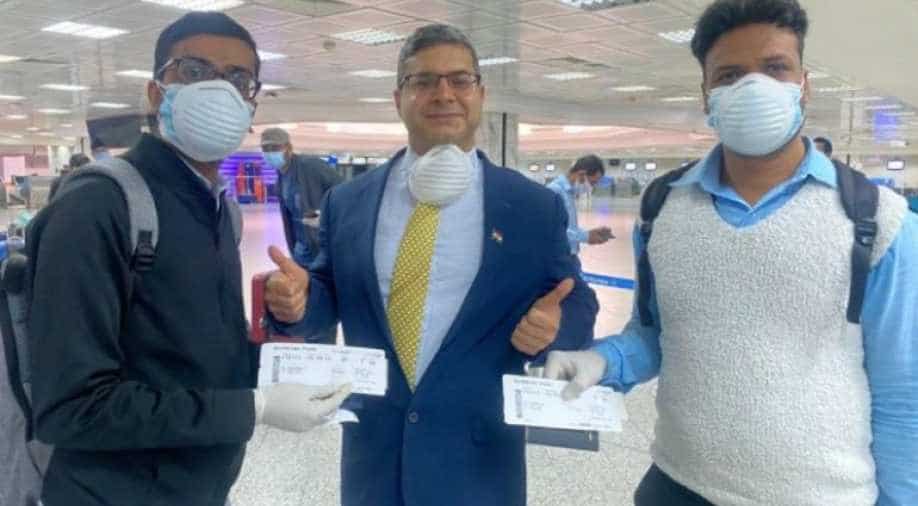 The Indian mission in Tunisia was able to send 25 Indians stranded in the North African country back to India in a Tunisian military plane.

In a very interesting and proactive development, 25 stranded Indians were brought back from Tunisia in a military plane, which was en route Thailand and Vietnam.

Speaking exclusively to our Principal Diplomatic Correspondent Sidhant Sibal from Tunis, Indian envoy to Tunisia Puneet Roy Kundal, while giving the details of the operation, thanked the Tunisian government and said, Indian diplomats in Tunisia have been personally speaking to Indians stranded in the country every week. Meanwhile, India has made sure no Tunisian government officials have been stranded in India and all were brought back before lockdown kicked in.

WION: How are both countries cooperating during the current times of covid crisis?
Puneet R. Kundal: India and Tunisia have a very historic relationship that goes back to 1958 when Tunisia got its independence. On the issue of COVID, Tunisia is not as badly hit as we are, as of now they have 1046 cases, with 883 recoveries and 47 deaths. So they have managed to keep it under control.

They follow, a similar containment strategy like we did, in terms of having a strict lockdown, complete lockdown, the prohibition of flights from outside and stopping movement between various cities and governorates. They have been able to control the situation. They are also in the process of requesting govt of India to provide them with some medicines, we don't have a formal request as yet. Informally I have been told, we will have a request from the govt, much in keeping with India's tag as the pharmacy of the world.

We have have been cooperating with Tunisia in providing the e-ITEC courses for Tunisian health professionals to help them fight the COVID pandemic. But there are some very good things that have emerged for Tunisia in this pandemic, most of these have been observed by foreign media. Like they have used, the robotic vehicle, for example, to enforce the lockdown on the streets. They are also using the robotic vehicle to help in checking of the people at the hospitals.

Tunisia has also created a web-based platform that scans lung X rays and evaluates if the person has COVID or does not has COVID. In terms of their progress on COVID, they have managed to decode local strain of the COVID virus, a local institute called the Pasteur institute is actively working on developing vaccination against COVID. They have been largely successful till now in handling the crisis. The biggest thing they did for us is that they allowed 25 Indians nationals who were stranded here to fly back on a Tunisian military aircraft that left Tunisia on 21st of May 2020 and reached on 22nd of May

WION: Coming to bringing back stranded Indians, Tunisian military aircraft brought back Indians. If you can give details.
Puneet R. Kundal: When the Vande Bharat mission started, the focus was on getting back the Indians from abroad, especially the blue collared workers. We only had 45 Indians here who were in the category of stranded Indian nationals. Therefore, organising a flight for 45 people, hailing from 10 different states in India, was always an uphill task. Tunisia has been sending its aircraft for getting Tunisians back from various cities. And we were on a lookout as and when they have an aircraft heading to India or anywhere in the east, we can request them to help us. We were told three days back, a Tunisian cargo aircraft of the military that was going to Vietnam and Thailand and will pick up stranded Tunisians from Delhi.

So at that stage, we sprung into action, we contacted, the embassy of Tunisia in Delhi, we contacted the foreign office here and requested them to accommodate Indians nationals on the flight. At the end of the day, 25 Indian nationals were interested in taking this flight. The government of Tunisia very kindly agreed to take them on board. I was at the airport and made sure all the Indians to do the COVID negative test first of all. They were spread across 4-5 cities across Tunisia. We established contact with concerned hospitals all across the country and made sure they underwent the test smoothly. Then we made arrangements for them to travel to Tunis, in the capital we arranged a hotel for them and made sure there is no problem when it comes to check-in and being looked after here.

On the morning of the flight, I was at the airport and made sure each of them boards the flight comfortably and I must say the process was extremely smooth and the embassy, all the staff worked hard. The Indian nationals who were in the process of getting repatriated were extremely cooperative. There were tensed moments, moments when we had to rush through things. Every operation has its own moments but at it 25 boarded the plane and have reached India on 22nd May.

WION: How has the mission been reaching out to the stranded Indians, in terms of accommodation or food. A helpline is something, all missions have..
Puneet R. Kundal: So we had a 24*7 helpline, that was available and we got everyone to register at the embassy. But one thing we did, since the number was less, was that we spoke to each person at least twice a week. We assigned our consular office here, who spoke to each person once or twice a week. I personally spoke to a few of them who were more anxious than others, including one 19-year-old medical student who was staying with a Tunisian family.

I must express thanks to that family as well, they gave him food, shelter and took good care of him for the last two months. So we made it point to reach out to each and every stranded Indian here, establishing touch with them once a week, attending to the questions. We made sure if they had a medical requirement that was taken care off. Most of them were in the professional category so no financial element involved but reaching out to them, giving them moral support, speaking them regularly, keeping the spirits high in this time was the main challenge.

WION: How has life been for Indian diplomats, for you, how much reliance for digital diplomacy has increased...
Puneet R. Kundal: Life is now digital, we really shifted a lot of activity to the digital platform. I must say the entire process started with PM of India reaching out to the SAARC leaders. Reaching out to the G20, with our FM S Jaishankar reaching out to all the counterparts using digital technology, that really spurred us on as well. The country has good digital infrastructure. We shifted whole lot of digital activities online as well.  The pace of the work also slackened down a bit but we tried to carry on the activity. We offered Tunisia e ITEC programmes. 120 Tunisians travelled to India every year.

Post-COVID, it was not possible so we were providing them training on COVID module by electronic means to get them involved via our training programmes, to keep up the pace of our training programme. In fact, I must also here add that there were 6 Tunisian nationals who were in India just before the lockdown and we brought them back here before we went into lockdown. That was also something worthy of notice that we made sure no Tunisian govt officials or trainees from our side who were stranded in India. We made sure each of them got back, there were 6 of these who were in India.

WION: Increased focus on digital diplomacy, but how have the ties been between the countries, how do you see ties in a post covid world?
Puneet R. Kundal: Digital diplomacy is here to stay. We understand that, they understand that. As I said, Tunisia has a good digital infrastructure backbone. They have been carrying out a whole lot of interactions, with multilateral organisations and forums digitally. We also expect that there will be a telephonic conversation between our Foreign minister and Tunisian FM very soon. There is a whole lot of interaction that goes on and we have been trying to inform the Tunisian side that life has to continue and life has to continue in a digital manner. This has also been taken cognizance by our ministry of external affairs in Delhi and we hope very soon we have some digital meetings we should be proud of before life resumes and actual travel starts.

Tunisia and India have a bilateral trade of 445 million dollars, this was a figure for last year. And one of the most important areas of cooperation is in the area of Phosphate. We have a bilateral investment project called Tunisia India fertiliser plant and India is committed to buying 100% of the output of the plant. That is the flagship of our cooperation, and it cut both ways --we get our phosphoric acid in a reliable fashion from Tunisia and the country gets 180-235 million dollars annually which adds to the resources of the country. Big companies like TATA and Mahindra produce vehicles here, we have electrical companies.

In fact, I am happy to tell you, on 20th may an Indian company has won the contract for building substations here. COVID or no COVID, bilateral interaction especially in economic and trade field is continuing. Politically the foreign minister Dr S Jaishankar was here, he met with the President and Speaker of the Parliament and had detailed discussions with his counterpart here. This is in addition to the regular interaction we have with Tunisia at the UN, Tunisia is the non-permanent member of the UNSC for this year and next year and we have a whole lot of cooperation with them at the multilateral forums in Geneva and New York. We have supported Tunisian candidature at several forums as have they, it ongoing cooperation because we have a similarity of vision on a lot of issues of multilateral interest.