Telangana elections: ‘Settlers’ and Muslims hold the aces in battle for Hyderabad 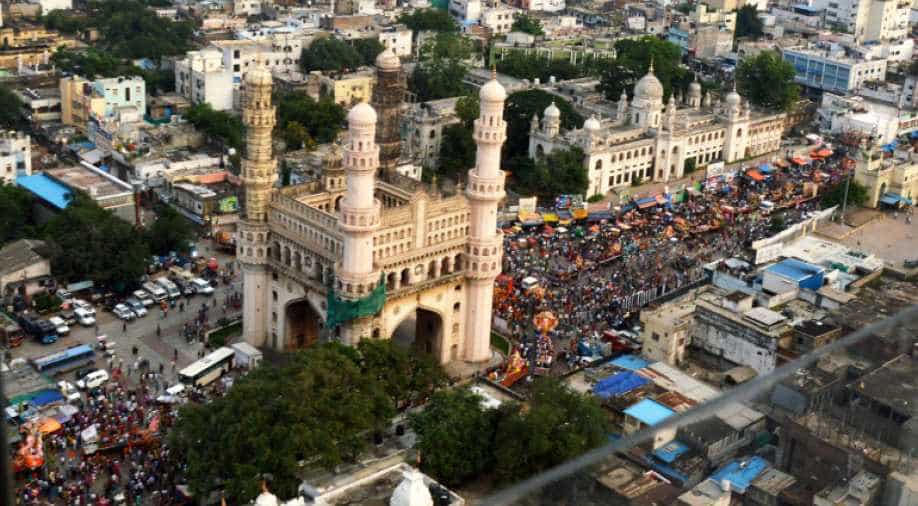 In the December 7 election, all the nine MLAs of the TDP, who had left the party subsequently, are contesting on TRS tickets.

Muslims and the “settlers” from the coastal and Rayalaseema regions of Andhra Pradesh are likely to play a crucial role in the electoral fortunes of the candidates in 24 constituencies falling under the Greater Hyderabad Municipal Corporation (GHMC).

The TDP and the BJP were in an alliance in 2014. For the upcoming Telangana Assembly polls, the N Chandrababu Naidu-led TDP has struck an electoral pact with the Congress.

In the December 7 election, all the nine MLAs of the TDP, who had left the party subsequently, are contesting on TRS tickets.

Naidu has been campaigning vigorously in the region for the candidates of the Congress-led “Praja Kutami” or the grand alliance, also comprising the TDP, the Telangana Jana Samithi (TJS) and the Communist Party of India (CPI).

Naidu has also addressed poll meetings along with Congress president Rahul Gandhi in the GHMC areas, which have over 40 lakh voters.

The AIMIM, which counts the old city as its stronghold, has fielded eight candidates in the region and is supporting the TRS in the remaining seats.

The K Chandrasekhar Rao-led TRS has described the AIMIM as a “friendly party” and said it would have “friendly contests” in the seats where the Owaisi-led party has fielded its nominees.

AIMIM MLC Syed Aminul Hasan Jafri said Muslims constituted 12.7 per cent of Telangana’s population and in the 24 constituencies in the GHMC areas, it was 30 per cent.

“The Congress’s tie-up with the TDP, which was a BJP ally until recently, may not gel well with the Muslim voters. Not only that, since the beginning, not many members of the minority community have voted for the TDP.

“Constituencies like Rajendranagar, Maheswaram, Serilingampalli, Kukatpally, Kutbullapur, Malkajgiri, Uppal and LB Nagar have large numbers of minority voters who certainly have a say,” he told PTI.

Most of the constituencies located in the GHMC area have a large number of people from Andhra Pradesh, also called the “settlers”, accounting for about 20 per cent of the total votes.

The TDP, which is being projected by the TRS as an “Andhra party”, is contesting in some of the key constituencies in the area such as Serilingampalli, Kukatpally and Uppal.

Naidu’s party, which largely banks on the votes of the “settlers”, has fielded party founder NT Rama Rao’s granddaughter Nandamuri Suhasini from Kukatpally.

Political analyst and former MLC Nageswar said the “settlers” would certainly play a decisive role in the electoral outcome in these seats, but they might not vote en masse for any particular party, given the “diverse social structure”.

He pointed out that the TRS had won 100 seats in the GHMC polls largely due to the votes of the “settlers”.

“They (settlers) may not vote for the TRS now, unlike the way they had done in the GHMC polls. At the same time, they may also not vote for the TDP en masse. A particular community, which has got the backing of the TDP, may vote for it, but there are other influential communities which may desist it,” Nageswar said.

Telangana will go to polls on December 7 after Chief Minister K Chandrasekhar Rao had dissolved the 119-member Assembly in September and the results will be declared on December 11.