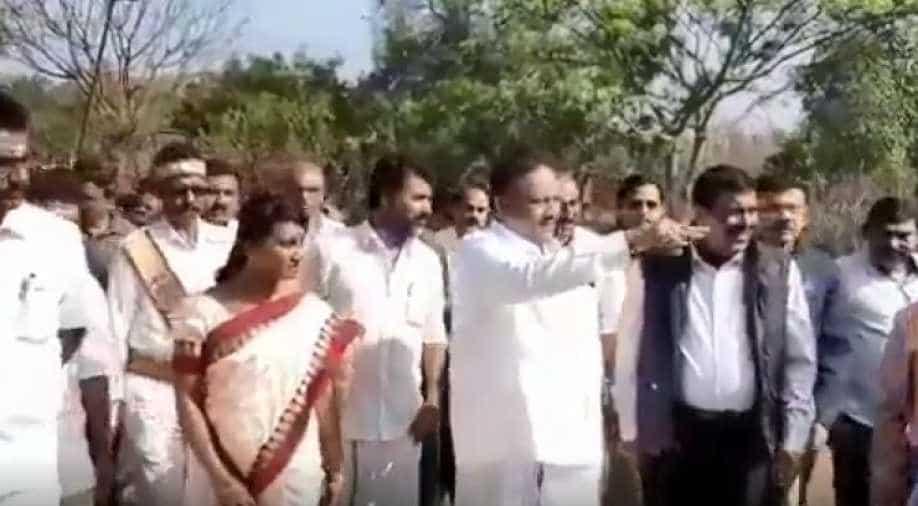 The incident happened when the 72-year old minister was at the Mudumalai Tiger Reserve to inaugurate a 48-day rejuvenation camp for captive elephants. Photograph:( WION )

A source told WION that the boys in the video were members of the tribal community and that their parents worked with the forest department.

During his visit to the Mudumalai Tiger Reserve (MTR) in the Nilgiri mountain ranges, Tamil Nadu Forest Minister Dindigul C Sreenivasan was caught on camera making tribal boys remove his footwear before he could enter a shrine.

The video sparked a flurry of criticism and raging comments against the minister on social media.
In the video, the minister is seen walking along with members of the district administration and other officials while signalling tribal boys to come and "undo the buckle” of his footwear.

A source told WION that the boys in the video were members of the tribal community and that their parents worked with the forest department.

The 72-year old minister was in the Reserve to inaugurate a 48-day rejuvenation camp for captive elephants, where they would be given special care and rest.

After the incident caused a furore online, the minister issued a clarification saying, “I had gone to the elephant camp along with the officials and later we went by walk to the nearby Ganesha temple. Two kids who were playing there were the age of my grandchildren. I called him and asked him to help me undo my buckle. I called him nearby only because he was a small child and there was no ulterior motive to this. I called him considering him as my grandson”.

Speaking to WION, senior journalist and political analyst Sumanth C Raman said, “The act that he committed was wrong, as he had asked a third person to help remove his footwear. He must have provided a justification about his intentions containing no malice, but that does not justify what he has done with the child was right. In the case that he was unable to bend and remove his footwear due to a medical condition or physiological impediment, he could very well request for a chair and could have done it on his own, while being seated. Even in the clarification issued, he doesn’t speak of a medical issue that was preventing him from being able to bend”.