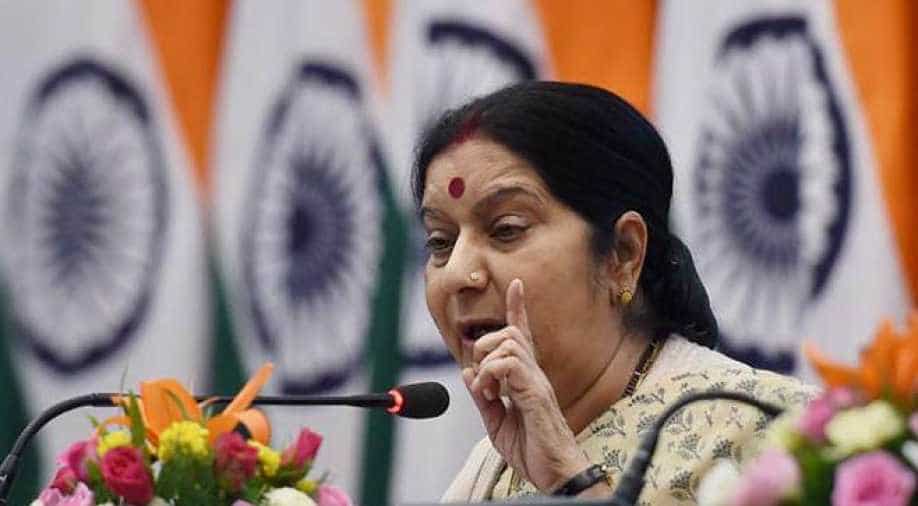 She said the Pakistani claim that there was a camera or a recording chip in Jadhav's wife's shoe was absurd.

Swaraj said Jadhav's wife Chetna had taken two international flights in those same shoes to get from Mumbai to Islamabad.

Chetna had travelled from Mumbai to Dubai on an Air India flight, and from Dubai to Islamabad on an Emirates flight.

Swaraj said people might still believe Air India had helped Chetna, but asked how she could possibly have smuggled a hidden camera or a recording chip in her shoe onto an Emirates flight.

A meeting of a mother with her son & a wife with her husband was turned into a propaganda tool by Pakistan :EAM Sushma Swaraj in Rajya Sabha #KulbhushanJadhav pic.twitter.com/Z5M28mVBGZ

Swaraj added that not only were Chetna's bindi and mangalsutra removed but also those of Jadhav's mother's Avanti.

Swaraj said that when Kulbhushan first saw his mother like that, without her mangalsutra and bindi, he thought something might have happened to his father.

Jadhav Ji's mother who only wears a saree was forced to wear salwar-kurta. Bindi, bangles & mangalsutras of both mother & wife were removed. Both the married women were made to like widows: EAM Sushma Swaraj in Rajya Sabha #KulbhushanJadhav

Swaraj spoke in both the Lok Sabha and the Rajya Sabha.

She said the meeting was started in absence of the Indian deputy high commissioner accompanying Jadhav's wife and mother and that if he had seen how their clothes were changed, he would have registered a protest there and then.

She also took up the heckling of the women by the Pakistani media.

She said it had been specifically agreed by both sides that media would not be allowed to come close to the family but that the Pakistani press not only came close to them but also harassed and hurled taunts at them:

"Thank god they didn't say that there was a bomb in her shoes! If for security reasons she was made to take off shoes, they should have returned them when she was leaving but no, they had to commit some sort of cruelty," Swaraj said.

"It was nothing like a humanitarian gesture. Human rights of the family members were violated again and again and an environment of fear was created for them," Swaraj added.