States in North and South will oppose Hindi imposition: Rajinikanth 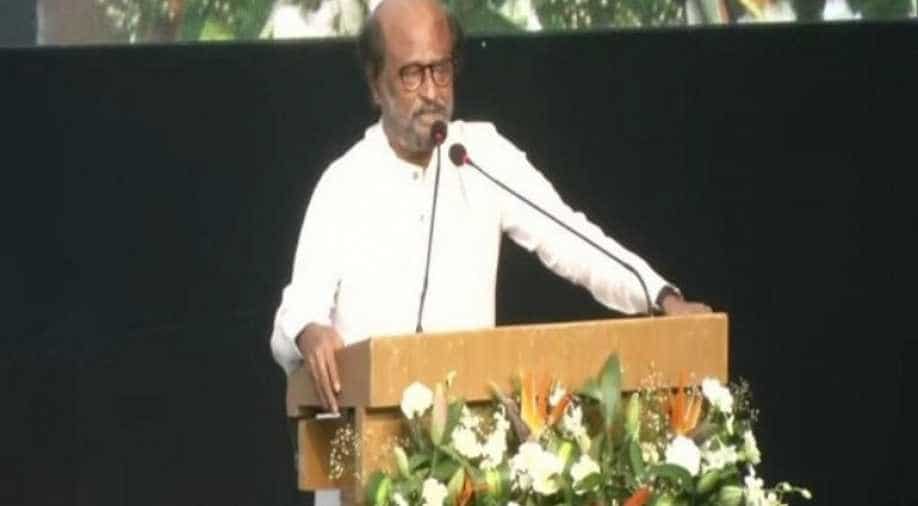 Rajinikanth has joined the league of celebrities and politicians that have voiced their opinion on the comments made by Home Minister Amit Shah on Hindi being a unifying language.

Speaking to reporters at the Chennai airport, Rajinikanth said, ''Not just in our country, but a common language would augment the progress, growth and unity in any country. But unfortunately, we can't bring a common language in our country. So, no language can be imposed on us. If they impose Hindi not just Tamil Nadu, but states across South India will not agree and even in North India many states won’t agree.''

Leaders from across the spectrum in Tamil Nadu have united in taking a stance against the comments of the home minister.

The opposition party Dravida Munnetra Kazhagam (DMK) has called for a state-wide Anti-Hindi protest on Friday.

DMK President MK Stalin said, ''The Prime Minister should clarify his stand, otherwise the DMK will get ready for another language war. This is India, not 'Hindia’. There is a threat to India’s unity after attempting to thrust Hindi in Railways, Postal jobs. DMK will not hesitate to unite states which stand to lose rights due to Hindi dominance.''

Rajini’s friend and fellow actor Kamal Haasan, who is also the President of political party Makkal Needhi Maiam, lashed out at Amit Shah and said, ''No Shah, Sultan or Samrat can renege on the 1950 promise of the Government of our Constitutional Republic that the people will not have to give up their language, culture or traditions.''

He also added that the battle for the language will be exponentially bigger than that of the 2017 Jallikattu protests and India or Tamil Nadu did not deserve such as battle.

Tamil culture minister K Pandiarajan, whose party the All India Anna Dravida Munnetra Kazhagam (AIADMK) is in an alliance with the BJP had warned of an adverse reaction from other states as well.

Pandiarajan said that if the Centre ever imposes Hindi unilaterally, them there will only be an (adverse) reaction and no support, not only in Tamil Nadu but also across states such as West Bengal, Karnataka and Andhra Pradesh.

Leaders of neighbouring southern states too were against the Home Minister’s stance.

Kerala Chief Minister Pinarayi Vijayan stated that the perception of only Hindi language can unite the country is completely wrong. The people in the South and Northeast don't speak Hindi, he added.

Pinarayi Vijayan called Amit Shah's Hindi pitch to make it their primary language an attempt to disown their mother tongue.

BJP leader and Karnataka Chief Minister Yeddyurappa tweeted out ''All official languages in our country are equal. However, as far as Karnataka is concerned, Kannada is the principal language. We will never compromise its importance and are committed to promoting Kannada and our state's culture.''

While the anti-Hindi agitations have been a movement in Tamil Nadu since the 1930s, it was the 1965 protests that helped dislodge the Congress government, which was replaced by DMK in the 1967 Assembly polls, hence enabling the uninterrupted rule of Dravidian parties - the DMK and AIADMK for over 52 years.