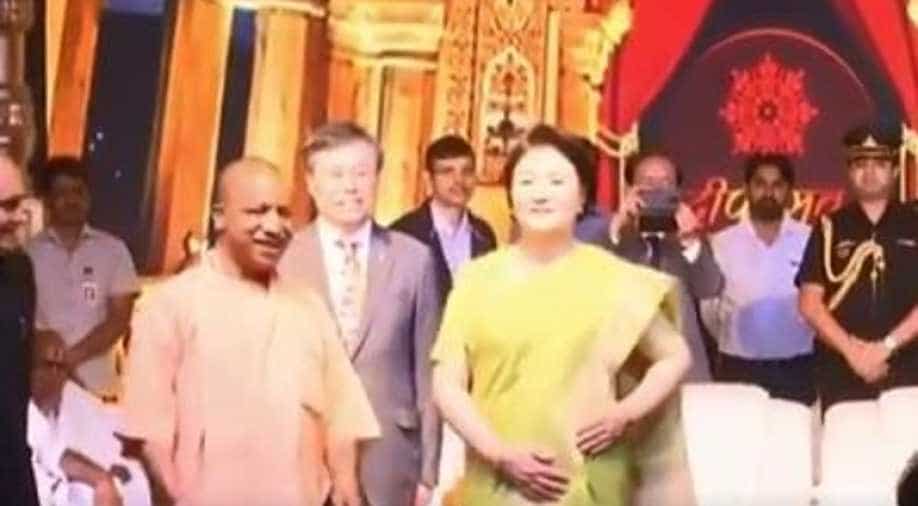 Kim garlanded 'Sita' as they descended from the helicopter and Uttar Pradesh Governor Ram Naik and Adityanath welcomed Lord Ram and Laxman by garlanding them.

South Korean First Lady Kim Jung-sook arrived in Ayodhya Tuesday to attend Diwali festivities in the holy city and began her tour by offering tribute at the Queen Heo Memorial.

Kim visited the site, along with Chief Minister Yogi Adityanath, and attended a ground-breaking ceremony for upgrade and beautification of the memorial dedicated to the legendary princess of Ayodhya who went to Korea.

Later she went to the banks of the Saryu river to welcome artists donning the avatar of Lord Ram and Goddess Sita, who arrived at Ram Katha Park in a ceremonial chopper as part of 'Ram Durbar'.

Kim garlanded 'Sita' as they descended from the helicopter and Uttar Pradesh Governor Ram Naik and Adityanath welcomed Lord Ram and Laxman by garlanding them.

Union Minister V K Singh also attended the grand event in Ayodhya.
Kim's stand-alone visit to India, which began on November 4, has rekindled interest in the legendary princess who married a Korean king.

According to Korean legend, the Princess of Ayodhya went to Korea in 48 AD and married King Kim-Suro.

A large number of Koreans trace their ancestry to this legendary princess, who is known as Queen Heo Hwang-ok.

"The legend of Queen Heo Hwang-ok binds the two countries together culturally, and her visit will further promote our people-to-people ties," a senior official at the cultural wing of the South Korean Embassy in India told PTI.

Huge hoardings, bearing message -- 'South Korean First lady Kim Jung-sook - Welcome to Ayodhya ' and her picture, have been put up across the city.

An agreement regarding the Queen Suriratna Memorial Project was signed to facilitate upgrade and expansion of the existing monument commemorating Princess Suriratna (Queen Hur Hwang-ok).

In July, the two countries signed the agreement for expansion of the Suriratna memorial project.

Uttam Das, a seer from Ayodhya, told PTI, "It was a matter of honour for Ayodhya that she was visiting Ayodhya."

"A princess of Ayodhya had gone there around 2,000 years ago, and now the First Lady is visiting Ayodhya, life has sort of come full circle," he said.