Rafale deal: Sitharaman asks whether opposition being used in game of corporate rivalry 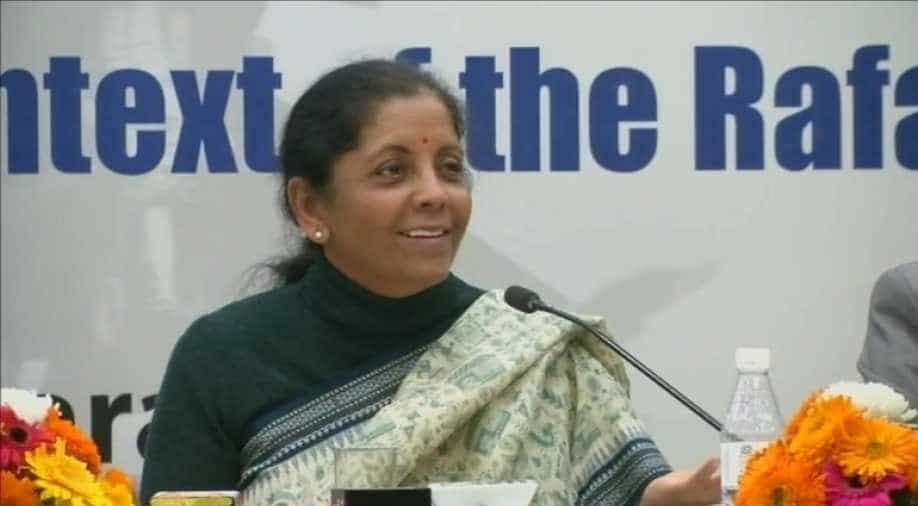 During her address at an event here, Sitharaman said ever since the Modi government came to power, there was a conscious effort to keep middlemen at bay from the corridors of the Defence Ministry.

Accusing the opposition of spreading misinformation in the Rafale deal, Defence Minister Nirmala Sitharaman Saturday wondered whether they were becoming pawns in corporate rivalry and whether the procurement of 36 fighter jets was being "sabotaged."

During her address at an event here, Sitharaman said ever since the Modi government came to power, there was a conscious effort to keep middlemen at bay from the corridors of the Defence Ministry.

Nirmala Sitharaman: If their intention is to sabotage even this procurement (Rafale), to stop the purchase even now, that's the icing on the cake as regards disservice to the nation. Icing on the cake is a wrong expression but just the cruel last hit towards serving this nation. pic.twitter.com/I9MCNptrrJ

Her attack on the opposition parties comes a day after a newspaper report claimed Prime Minister Narendra Modi's decision to buy 36 Rafale jets, instead of 126 as negotiated by the previous UPA government, was taken while bypassing mandated procedures, pushing the price of each aircraft by 41.42 per cent. The Congress has launched a fresh salvo at the government on the Rafale deal citing this report.

Sitharaman was addressing a seminar on 'India's Strategic Interest in Context of the Rafale Deal'. She accused the opposition of doing a "disservice" to the nation by misinforming the public on the fighter jet deal.

"You (opposition) are misinforming the public and doing disservice to the country if you are becoming pawns in corporate rivalry. Is India's interest at the top of your agenda or are you becoming a partner to some kind of corporate rivalry," she asked.

"Is your intention to sabotage this procurement? If the intention is to stop the purchase, (then) that's disservice to the nation," she said.