Watch: Presence of brave soldiers at the border lights the lamp of hope, says PM Modi at LoC 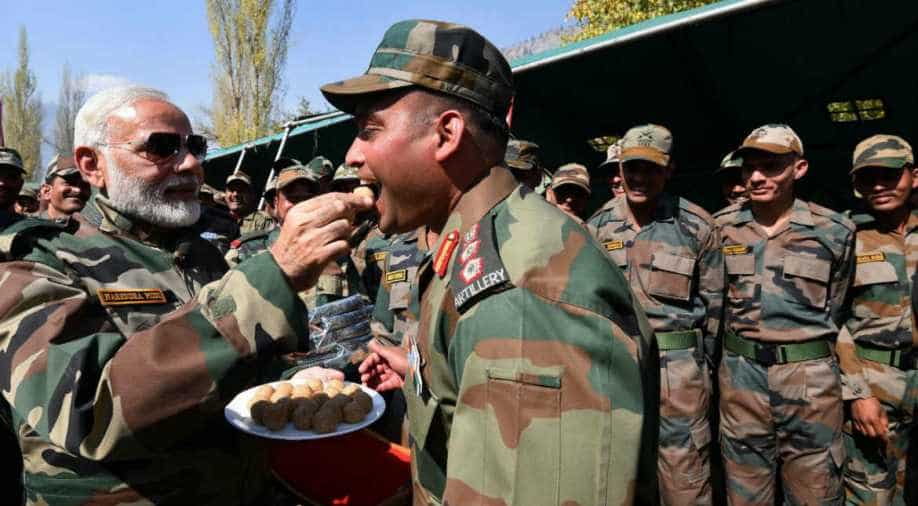 Modi arrived at Gurez on Thursday morning in an unannounced visit. ||The PM said each Indian citizen must cultivate a new resolve as India celebrates its 75th independence in 2022

Prime Minister Modi today celebrated Diwali with Indian troops at a forward military post along the Line of Control(LoC) in Jammu and Kashmir's Gurez sector.

"I have an opportunity to spend the festival of Diwali with you. The presence of brave soldiers at the border, on this festive occasion, lights the lamp of hope, and generates new energy among crores of Indians," the prime minister wrote in the visitors' book.

"To accomplish the dream of 'New India', this is a golden opportunity for all of us to work together. The Army too is a part of it," the Indian Prime Minister said.

PM Modi offered sweets and exchanged greetings with the BSF soldiers at Gurez.

The PM said each Indian citizen must cultivate a new resolve as India celebrates its 75th independence in 2022, adding that he considers the Indian Army his family.

Modi encouraged the soldiers to practise yoga and said after leaving the armed forces they can become excellent yoga trainers.

Modi said the Centre was committed to the welfare armed forces pointing towards the implementation of One Rank, One Pension.

Earlier in the day, Modi greeted the nation on Twitter as he left for the border to celebrate the occasion with the Indian troops.