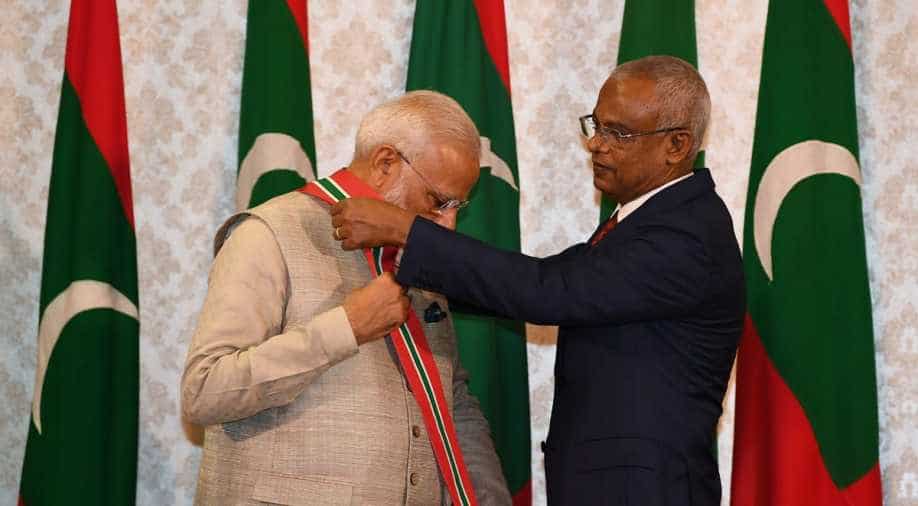 PM Modi being conferred with the Most Honourable Order of the Distinguished Rule of Nishan Izzuddeen by Maldives President Solih Photograph:( Twitter )

Counter-terror was a subject PM raised both in the Maldives and in Sri Lanka.

Prime Minister Narendra Modi on Sunday wrapped up his two-nation visit to the Maldives and Sri Lanka stressing on New Delhi's "neighbourhood first" policy and focusing on a range of issues from counter-terror, climate change, Indo-Pacific region. This was Modi's first visit abroad in the second term and symbolic in several ways.

Counter-terror was a subject PM raised both in the Maldives and in Sri Lanka.

In a strong message of solidarity to terror-hit Sri Lanka, Modi's first stop in the country was the St Anthony's church in Kochchikade. The church was the site of one of the terror attacks on April 21.

Over 93 people died in the Chruch in the Easter Sunday coordinated attacks that killed more than 250 people. "I am confident Sri Lanka will rise again. Cowardly acts of terror cannot defeat the spirit of Sri Lanka. India stands in solidarity with the people of Sri Lanka," Modi tweeted immediately after his visit.

"My heart goes out to the families of the victims and the injured," He added.

Modi is the first head of any government to visit the island nation after the terror attacks.

In the Maldives, Modi called for an international conference on terror, saying "The water is now rising above the head".

India had proposed Comprehensive Convention on International Terrorism or CCIT in 1996 that called for a common definition for terror but the draft has remained a draft because of lack of consensus at the United Nations.

Without mentioning Pakistan PM said, "State sponsorship of terrorism is the biggest threat the world is facing today".

"Terrorism is not just a threat for a country, but to the entire civilisation. It is very unfortunate that people are still making the mistake of distinguishing between good terrorists and bad terrorists," Modi further said.

New Delhi's actions on terror in the past had the backing of both Sri Lanka and the Maldives.

India and Maldives both agreed to set up a Joint Working Group on Counter Terrorism, Countering Violent Extremism and De-radicalisation.

Meanwhile, the mention of Indo-Pacific by PM Modi in the Maldivian Parliament is something that will not go unnoticed in several world capitals including Beijing which sees the concept very suspiciously.

Calling for a "Free and Open Indo-Pacific", PM said, "India will not only use its strength to strengthen its own nation but also its neighbours and their bright future."

"The maldives will be a great partner for" India's vision for Indo Pacific as both are "neighbours and friends," he added.

This is the second time, PM Modi has publically addressed the concept from an international forum. Last year PM spoke about Indo-Pacific at the Shangri La Dialogue in Singapore.

With increased Chinese influence in South Asia and the Indian Ocean region, India is keen to engage with its maritime neighbours such as Mauritius, Maldives, Sri Lanka and Seychelles.

To boost connectivity a passenger-cum-cargo ferry service between Kochi and Kulhudhuffushi in Malé was inaugurated during Modi's visit.

For Sri Lanka India has provided 14,000 houses to upcountry Tamils (Indian origin Tamils), ambulances and rolling stock for railways. India is also working with Japan and Sri Lanka to develop an LNG terminal and east container terminal at the Colombo port.

Modi's Sri Lanka visit was short and packed but saw him meeting the top leadership of the country and interact with the Indian community.