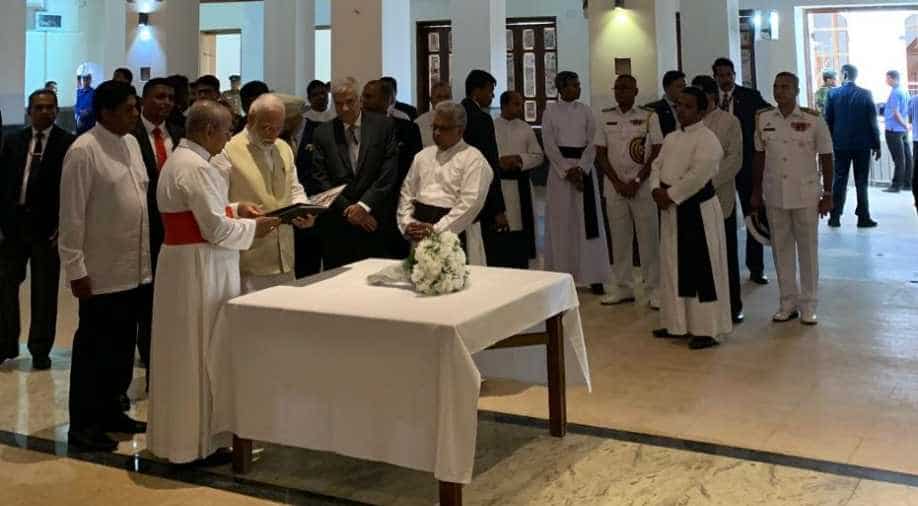 PM Modi is the first head of government to visit the country after the Easter Day terror attacks.

In a strong message of solidarity to Sri Lanka, PM Narendra Modi's first stop during his ongoing visit to the country was the St Anthony's church in Kochchikade, Sri Lanka. The church was the site of one of the terror attacks on April 21. Over 93 people died at the Chruch during the Easter Sunday attacks that killed more than 250 people.

Following his visit, the prime minister tweeted, "I am confident Sri Lanka will rise again. Cowardly acts of terror cannot defeat the spirit of Sri Lanka. India stands in solidarity with the people of Sri Lanka".

I am confident Sri Lanka will rise again.

India stands in solidarity with the people of Sri Lanka pic.twitter.com/n8PA8pQnoJ

He tweeted, "My heart goes out to the families of the victims and the injured".

Started the Sri Lanka visit by paying my respect at one of the sites of the horrific Easter Sunday Attack, St. Anthony's Shrine, Kochchikade.

My heart goes out to the families of the victims and the injured. pic.twitter.com/RTdmNGcDyg

PM Modi is the first head of government to visit the country after the terror attacks.

St Anthony's church is one of the oldest churches in the Sri Lankan capital belonging to the Dutch era and was built by one of the priests from Cochin, India. In fact, it is one of the first buildings one can see when ships enter the Colombo port.

WION team, while covering the aftermath of the terror attacks in April, was present next to this church when a 'controlled explosion" took place. The impact of the explosion was such that it caused commotion around the place.

Speaking to WION, the head priest of the church Father Jude Fernando had said, "We will build the church, but can bring back the lives".

PM Modi is on a short and packed 3-hour-long visit to Sri Lanka after his day-long tour to the Maldives - his first foreign visit in the second term.

In the Maldives also, PM had talked about terror. Speaking in the Maldivian Parliament he said, "Terrorism is not just a threat for a country, but to the entire civilisation. It is very unfortunate that people are still making the mistake of distinguishing between good terrorists and bad terrorists."

Without naming Pakistan, PM said, "State sponsorship of terrorism is the biggest threat the world is facing today"

PM Modi visited Sri Lanka twice in his first term, first in March 2015 when he travelled to Anuradhapura, Talaimannar, and Jaffna and then in 2017 when he was the chief guest at the Vesak day celebrations.