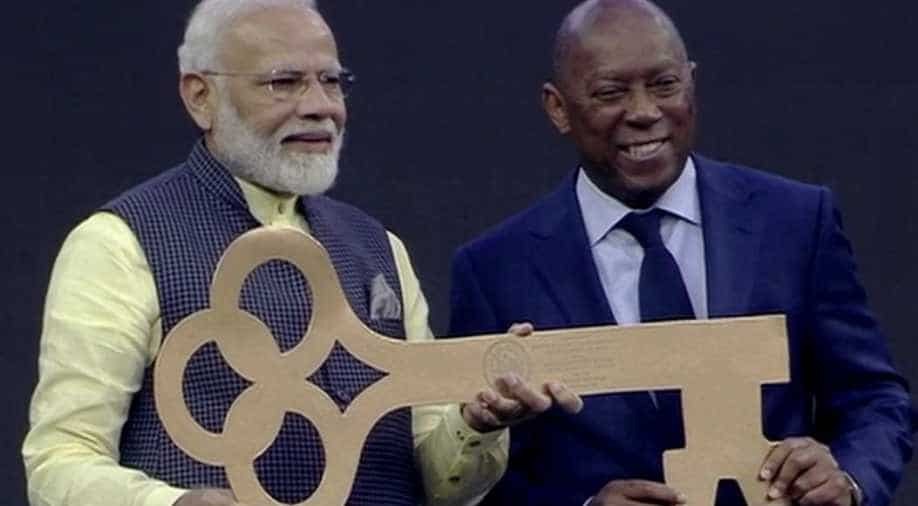 The Prime Minister won hearts by bowing to the crowd after he walked on to the stage to chants of 'Modi! Modi!' emanating from the crowd.

Prime Minister Narendra Modi was presented the key to Houston city upon his arrival at the 'Howdy Modi!' event on Sunday.

The Mayor of Houston Sylvester Turner presented a large, golden cut-out of the key to Modi, soon after he reached the venue.

The gesture was made in recognition of the exceptional relationship shared between the people of India and Houston.

The Prime Minister won hearts by bowing to the crowd after he walked on to the stage to chants of "Modi! Modi!" emanating from the crowd.

Thanking the city for its warm welcome, the PM tweeted, "Thank you Houston for such amazing affection! #HowdyModi" along with a video that showed an ocean of people welcoming the leader at Houston's NRG Stadium.

The first of its kind event is being held in honour of Prime Minister Modi, who is currently on a week-long official trip to the United States to address the UN General Assembly, amongst other official engagements.

US President Donald Trump's presence at the event was confirmed by the White House, showing the strong, personal ties shared between the leaders of the two largest democracies of the world.