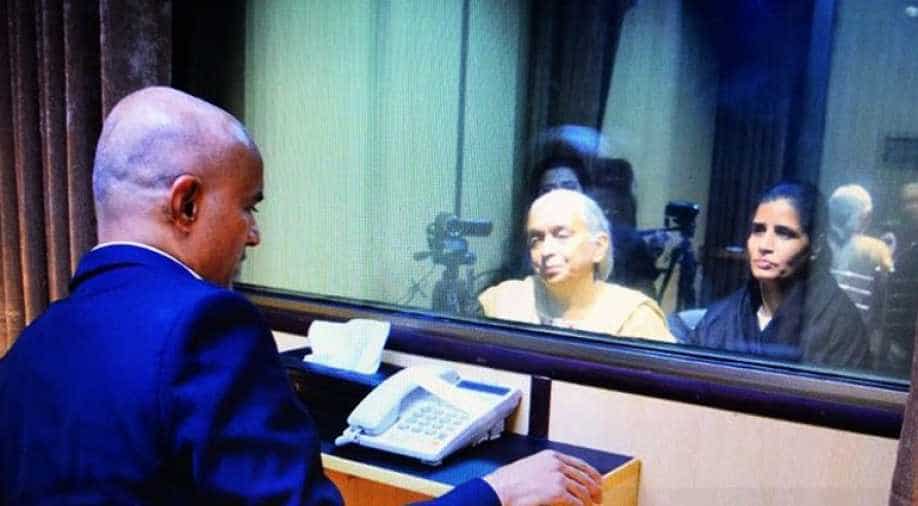 Kulbhushan Jadhav meets his wife and mother in Islamabad on December 25. Photograph:( Twitter )

Pakistan confirmed Mr Jadhav's meeting with family was a "humanitarian" one and did not constitute "consular access", a request India has repeatedly made.

"It was a humanitarian meeting, it was not consular access. The Indian diplomat JP Singh was present and could see the meeting but was not allowed to meet, we extended the meeting by 10 minutes on request of Jadhav," Dr Mohammad Faisal, Pakistan's Foreign Ministry spokesperson said after the meeting.

"This meeting was not consular access as we had told India that its diplomat would see the meeting but was not allowed to speak or participate in it," Pakistan's Foreign Ministry spokesperson said.

In pics: How Kulbhushan Jadhav's family met him

"All decisions on consular access will be taken on the basis of law and interests of Pakistan," Faisal said in response to a question about granting the consular access.

Pakistan has repeatedly denied India consular access to Jadhav on the ground that it was not applicable in cases related to spies.

In pictures posted by Pakistan's foreign office, Mr Jadhav can be seen communicating with the two women over intercom, separated by a glass screen.

Meeting between Commander Kulbushan Jhadev & his family in progress pic.twitter.com/THG925V1fO

Pakistan said the glass barrier was for security reasons.

"It was for security reasons, we had already told them that you will be able to meet him but a security barrier would be there," Dr Mohammad Faisal said.

Dr Fariha Bugti, in charge of the India desk at the Pakistan Foreign Office, represented the Pakistani side at the meeting.

During a press conference after the meeting, Pakistan repeated the old allegations against Kulbhushan Jadhav who it accuses of espionage.

#KulbhushanJadhav's mother and his wife at Pakistan Foreign Affairs Ministry in Islamabad after their meeting with him ended. Deputy High Commissioner JP Singh also present. pic.twitter.com/kpWP7VVUzm

#KulbhushanJadhav's mother and his wife enter Indian High Commission compound in Islamabad after meeting him at Pakistan foreign ministry pic.twitter.com/BSR4RfvqS1

They had a brief stop at the mission before heading to the airport to catch a flight to India via Dubai.

Kulbhushan Jadhav's mother and wife at the Pakistan Foreign Affairs Ministry in Islamabad on December 25. (Twitter)

It said it was permitting the meeting "as a humanitarian gesture, on the birthday of the Father of the nation, Quaid e Azam Muhammad Ali Jinnah."

Mr Jadhav's wife and mother greeted the media after arrival but refused to respond to questions. They were accompanied by India's deputy high commissioner JP Singh and a woman Pakistani official.

Mr Jadhav's family arrived at the Ministry of Foreign Affairs from the Indian High Commission where they halted for more than half an hour.

Kulbhushan Jadhav was at the Ministry of Foreign Affairs before the arrival of his family. It was not known where he had been kept before being transported to the ministry.

This is the first meeting between Jadhav and his family since his arrest on March 3 last year for alleged espionage.

Heavy security was deployed around Pakistan's Ministry of Foreign Affairs.

Pakistani media reports said Pakistan Rangers, anti-terrorism squads and sharpshooters on rooftops around the ministry had been deployed.

The reports added that apart from security and media personnel, no other traffic is being allowed into the area.

Jadhav's wife and mother had landed in Islamabad a little earlier.

They flew in from Mumbai via Dubai and will return to India this evening itself via Muscat, Oman. They will spend a total of only seven hours in Pakistan.

There are very few direct flights from India to Pakistan.

Jadhav's wife and mother first went to the Indian High Commission and then, after a while, made their way to the Pakistani Ministry of Foreign Affairs.

The ministry has said the meeting will not be allowed to go on for more than an hour.

The meeting between Jadhav and his family is expected to last between 30 minutes and one hour. In photo: Pakistan's Ministry of Foreign Affairs. (WION)

Pakistan has announced it would issue photos and a video of the meeting and also allow the family to interact with media if India agrees. Officials also said Jadhav's family would not interact with the media.

Jadhav was sentenced to death by a Pakistani military court on charges of espionage and terrorism in April, following which India moved the International Court of Justice (ICJ) in May. The ICJ halted his execution on India's appeal pending the final verdict by it.

India, however, maintains that Jadhav was kidnapped from Iran where he had business interests after retiring from the Indian Navy.

On December 20, Pakistan issued a visa to Jadhav's wife and mother to visit Islamabad to meet him.