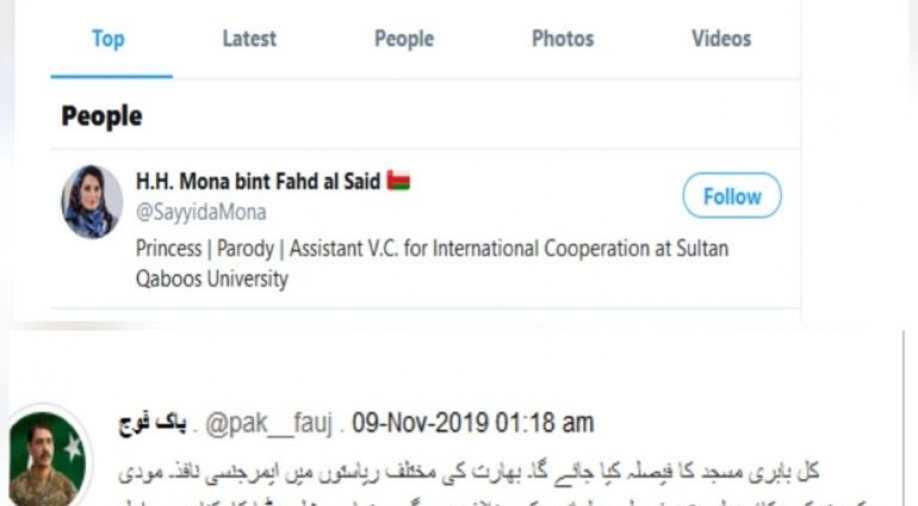 An increase in the number of Pakistani accounts changing the name to Arabic names or after names of Arabic royalty has been seen.

Twitter gives the option of changing one's Twitter name, username and description but its history is not managed publicly.

The handle Pak Army took full advantage of it and changed its profile's identity to show it as the profile of Omani Princes. What followed an anti-India tweet on ties between India and the Gulf which was retweeted by many including by Pakistani media personnel.

Incidentally, to save itself from being reported and get blocked by Twitter, the account had "parody" mentioned in its bio, something not noticed by many. Twitter doesn't block parody accounts.

The name of the account was changed recently so this username is present in Twitter cache since a simple search of @pak_fauj will lead to the parody account @SayyidaMona. Also, many old tweets by the account were not deleted, perhaps to show it is an old account.

The unique twitter ID of @SayyidaMona is 2870592601 which cannot be modified or transferred. Interestingly, WION was able to crawl out several old tweets from the same account which have been deleted now and it clearly shows Pakistan's ISPR is behind the account. Links from deleted tweet - pic.twitter.com/rYCleSt8SN and pic.twitter.com/LLt3FN1Yed when in google searches shows number of Pakistan army links.

Meanwhile, the Omani Princess Mona bint Fahd who was impersonated has issued a statement. In the statement, she said,"Friends, First of all I thank you for your concern to verify the offensive post published through an account impersonating me, which you are sure that I have no connection with it."

Adding,"With full trust in all of you in strengthening awareness among all regarding such activities, which are not acceptable to the Omani society, I confirm again that my presence in social media is restricted on the following accounts: @hhmonaalsaid   and @MonaFahad 13."

Indian envoy to Oman Munu Mahawar thanked the Omani princes for clarification. In a tweet he said,"I thank HH @MonaFahad13 for clarification on fake social media posts attributed to her" and India values its "friendly relations with Oman and will continue working closely with the Government and people of Oman to further strengthen our special relationship."

Wednesday's case of Pakistani accounts changing the name has been the only case. A number of Pakistani accounts have been seen trying to change names into Arabic sounding names and tweet anti-India material. And while this is happening, Pakistani foreign minister SM Qureshi was seen fishing in troubled waters.

Highlighting the huge Indian diaspora in Gulf, he said, "Gulf..for example Oman has said Indians working in the country should leave".

No such thing has been said by the Oman govt and it seems he was attributing it fake tweet which was attributed to Omani princess. He also said he will write to Gulf foreign ministers and ask them to reset ties with India over the situation of Muslims in the country, something that will not find many takers in the region.