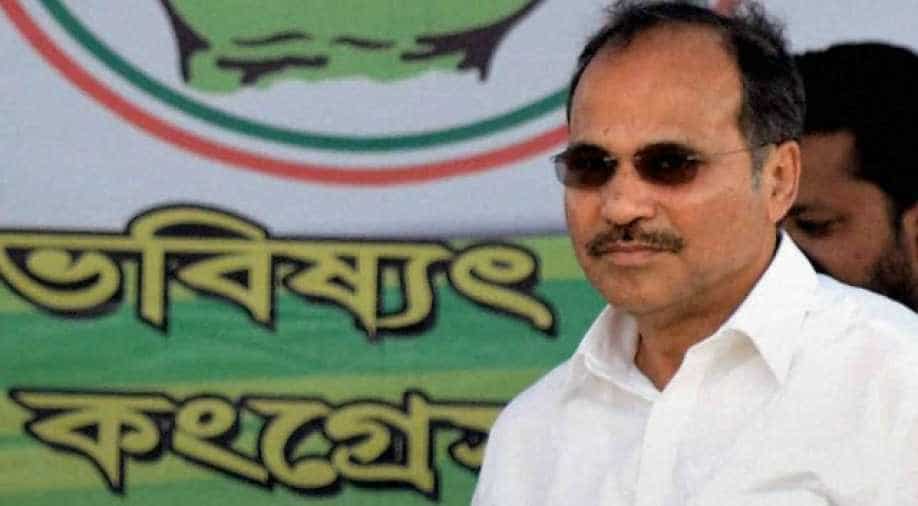 The Congress leader hinted at the possibility of some more young leaders quitting the party after the high-profile desertion of Jyotiraditya Scindia and rebellion by Sachin Pilot.

Leader of the Congress in the Lok Sabha Adhir Ranjan Chowdhury feels a section of young "overambitious" leaders is becoming increasingly restless and deserting the party due to the growing perception that it is not going to return to power at the Centre anytime soon.

Conceding that their exit might adversely impact the party "temporarily", the veteran Congress MP, however, said party "discipline and ideology can't be compromised to satisfy the individual aspirations of leaders who lack ideological commitment.

The Congress leader hinted at the possibility of some more young leaders quitting the party after the high-profile desertion of Jyotiraditya Scindia and rebellion by Sachin Pilot.

"There is a certain section of overambitious young leaders. They are becoming restless and feeling they are not getting their due in the party and are looking for other options to satisfy their individual ambitions."

"This is happening due to a growing perception that as the Congress wont return to power (at the Centre) shortly, so the party wont be able to satisfy all their demands. So they are either jumping the ship or are planning to do so," Chowdhury told PTI in an interview.

Talking about Scindia and Pilot, he said they were never neglected or given short shrift by the party.

He said there have been leaders with great potential in several political parties who did not get their due.

"But did they leave their party to enjoy the fruits of power? The answer is no. The problem is the lack of commitment," he said.

Chowdhury also rejected the claim that Jyotiraditya Scindia won Madhya Pradesh for the Congress as its campaign committee chief for the assembly polls.

If that were the case, he would not have lost his Lok Sabha seat, the veteran Congress leader said.

Rajasthan, where Sachin Pilot has risen in revolt against Chief Minister Ashok Gehlot, has a history of change of guard every five years, Chowdhury said.

"Had he (Pilot) been the only factor which led to our victory in the 2018 assembly polls we wouldnt have fared so badly in the 2019 Lok Sabha polls in Rajasthan, he said.

Scindia left the Congress with his band of loyal MLAs in March and joined the BJP, resulting in the fall of the Kamal Nath government and the saffron party's return to power.

Pilot was removed as deputy chief minister and Rajasthan Congress president after he revolted against Gehlot, a representative of the old guard in the Congress.

He has neither left the party nor been expelled.

Former union minister Milind Deora, one of the young faces in the Congress had last year proposed Pilot and Scindia for the post of the party's national president.

Deora had told PTI he agreed with Punjab Chief Minister Amarinder Singh that the new Congress president should be young, capable and possess electoral, administrative and organisational experience, and a pan-India appeal.

"In my view, Sachin Pilot and Jyotiraditya Scindia have all these qualities and can provide strength to the organisation and vigour to the opposition space," he had said.

When asked whether the disillusionment of the young leaders stems from the power struggle between the old guard and the Young Turks in the party, with the former holding sway, Chowdhury replied in the negative.

Just because I am over 60 will you throw me out of the party? In BJP, when Atal Bihari Vajpayee, L K Advani were leaders, they had groomed others like Narendra Modi and the present-day BJP leadership, he said.

Chowdhury blamed a section of media for presenting the difference of opinion as disputes within the party.

He dismissed as "untrue" suggestions that Scindia and Pilot were sidelined as they could pose a threat to Rahul Gandhi's leadership.

"This is completely untrue. Had Rahul Ji felt threatened by them, he wont have encouraged them to take up important assignments both in the party and in governments, he said.

When asked whether the problems the Congress is facing stemmed from a leadership crisis, the five-time MP from West Bengals Beharampore said the party is just going through a bad, rough patch, which is quite common in politics.

"There is no leadership crisis in our party. Its a media creation. We have Sonia Gandhi as our leader and no one should question her political acumen as it under her leadership that the party won two successive terms from 2004- 2014," he said.

Responding to a question about who will take over the mantle from interim president Sonia Gandhi, Chowdhury, a member of the Congress Working Committee (CWC), the highest decision-making body of the party, said though there were several good leaders they lack the stature and charisma of the Gandhi family which acts as glue for the party.

"We would like to have a member of the Gandhi family to lead us. Sonia Gandhiji has done a great job in the last year. If Rahul Gandhi Ji wants to take up the mantle he can always do so," he said.

Asked why the Congress was reluctant about looking beyond the Gandhi family despite repeated electoral reverses, he said, "Thats because no one has the charisma the Gandhi family has. When we have someone else with such charisma, he can lead the party. We had P V Narasimha Rao, Sitaram Kesari as party presidents in the past."

He said a "false" perception has been created by a section of media at BJP's bidding that Rahul Gandhi is a "part-time politician".

Chowdhury said Rahul Gandhi is the only leader who has been consistently opposing Prime Minister Narendra Modi and his government's policies.

"He has been uncompromising in it. But a section of media loves to paint him as an immature politician. The day we return to power, you will find Rahul ji being hailed as a great politician," he said.