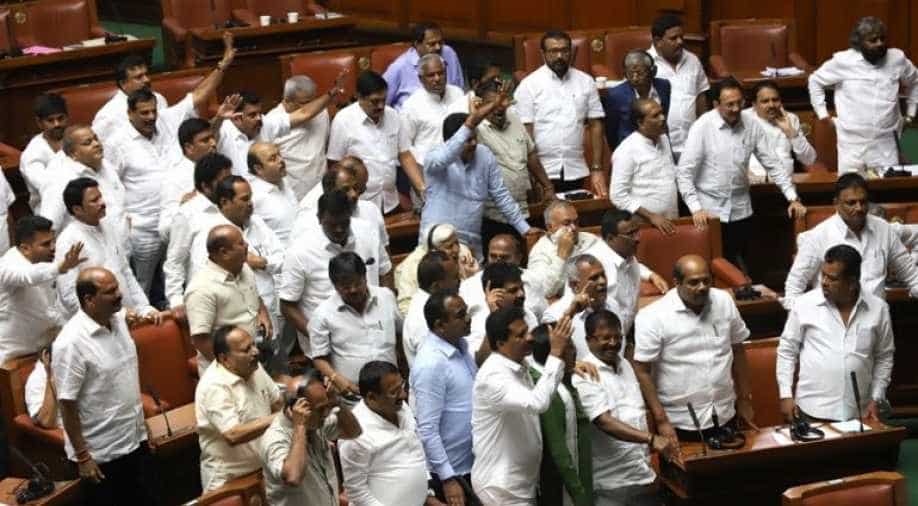 MLAs in the Karnataka Assembly, in Bengaluru. Photograph:( IANS )

Leader of Oppositions BS Yeddyurappa demanded that the motion should be put to vote as 'we are prepared to sit till midnight for the same' in the Assembly.

The ruling coalition and the opposition MLAs were on Monday locked in a heated debate in the Assembly over whether the vote on the confidence motion should be taken up tonight or tomorrow.

Leader of Oppositions BS Yeddyurappa demanded that the motion should be put to vote as "we are prepared to sit till midnight for the same" in the Assembly.

This was objected by the Congress MLAs, who started shouting slogans.

Congress MLA HK Patil informed the House about a pending court case and said that a debate should be done after this.

"After the Supreme Court takes a decision tomorrow, then it'll be right to speak and debate on this issue (trust vote)," Patil said.

However, his suggestion was strongly objected by Speaker KR Ramesh, who said, "Don't push me to a point where I will have to make a decision without asking you. The consequences will be disastrous."

Speaking in the Assembly, Madhu Swamy, MLA from Chiknayakanhalli constituency, stressed on trust vote, irrespective of presence or absence of rebel MLAs.

"It's not our duty to prove the numbers but it's their choice. It doesn't matter if the rebels will come or won't. SC is well aware of the no-confidence motion," he said.

Addressing the House after BJP lawmaker, Public Works Minister H D Revanna said: "CM had moved the trust vote motion. We're not dragging it but it's the BJP. We didn't go to the SC but it was the rebels. They said we cannot compel the MLAs to come for the Session and Siddaramaiah has spoken about our issues."

BJP lawmaker Madhu Swamy then urged the House to finish the trust vote by today itself.

"Please finish it today to save everyone's dignity," he said.

To this, Chief Minister HD Kumaraswamy responded sharply: "What do you mean by saving everyone's dignity? What have we done? We got to know everything about yourself this morning."

Later while speaking to reporters, Congress leader DK Shivakumar said, "The Speaker has served notice to rebel MLAs, giving them time till 11 am tomorrow. BJP is trying to convince them that they won't be disqualified and they will be made ministers. As per the Constitution of India, you can't be made a member once you are disqualified."