JDU will remain a part of NDA, will fight 2020 Assembly polls under leadership of Nitish: KC Tyagi 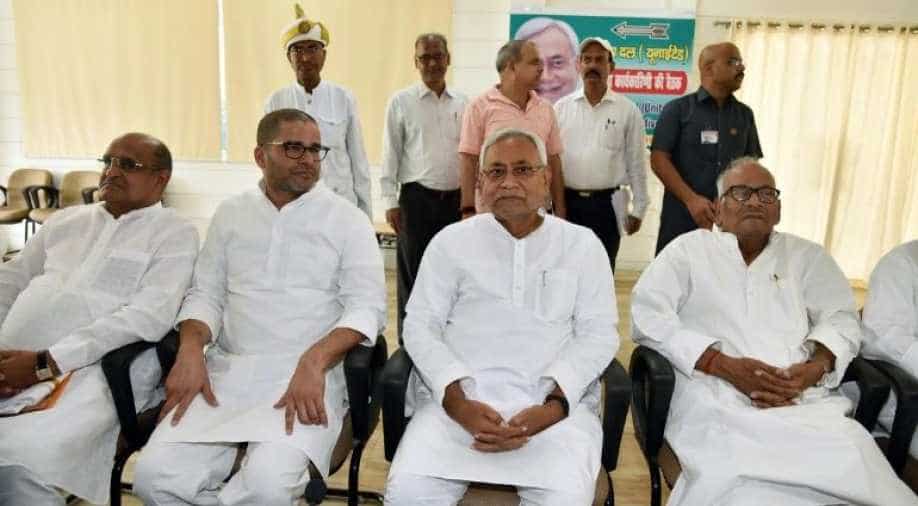 However, he also clarified that JDU won't be a part of the NDA government at the Centre.

Amidst controversy over JDU not joining the BJP led NDA government at the Centre, the party on Sunday made it clear that it would remain a part of the National Democratic Alliance (NDA).

"We want to make it clear once again that we are and will remain a part of the NDA. We are going to contest the 2020 Assembly polls under the banner of NDA and the leadership of Nitish Kumar," senior JDU leader KC Tyagi said while addressing a press conference here after the national executive meeting.

However, he also clarified that JDU won't be a part of the NDA government at the Centre.

Rejecting media reports that JDU had forwarded the names of some leaders to be inducted into the Union Council of Ministers, Tyagi said, "JDU did not forward any names for the Cabinet."

"In the first meeting between Amit Shah and Nitish Kumar, Shahji said that we have the majority but we will still give symbolic representation to all our allies. Nitish ji politely said that this is not possible."

The senior JDU leader asserted that offer to join the Union Cabinet came on a number of occasions, but these were turned down by his party.

"We reject all such rumours and misinformation and slandering campaigns," he said while reminding that Bihar Chief Minister Nitish Kumar addressed 171 meetings for Prime Minister Narendra Modi.

Talking about the party's plans discussed at the meeting of the national executive, Tyagi said, "We want to make our party a national party. We are a recognised party in Bihar and Arunachal Pradesh. The party has decided to contest the upcoming Assembly election in four states. We will try that we become a national party by 2020."

He also made it clear that JDU won't support the scrapping of Article 370.

"Jayaprakash Narayan was the only leader to support Article 370 when it was attacked by the Congress and attempts were made to dilute it. We are his descendants. It is our responsibility to raise questions put up by our ancestors. So there won`t be any compromise on that," he said.

Commenting on the Ram temple issue, the JDU leader said, "Prime Minister Narendra Modi and Mohan Bhagwat have said it that nothing will happen on the Ram Mandir front until the Supreme Court order is out."

"May this government last longer. May the country prosper under the leadership of Narendra Modi but we will not accept anything other than proportional representation," he said.

Clarifying about the controversy over JDU leader Prashant Kishor working for TMC leader Mamata Banerjee, Tyagi said, "IPAC has nothing to do with the JDU. Now, he is a doctor (pointing towards a leader sitting beside him). Should he stop giving prescriptions to Congress workers?"

"We want BJP to win in West Bengal and the TMC to lose. Is Prashant Kishor going to seek votes? Why would the party have any objection against his works until or unless he doesn`t make a statement or does something against the JDU and NDA," he added.