It took too long for an Indian PM to visit this country: PM Modi addresses Indian diaspora in Bahrain 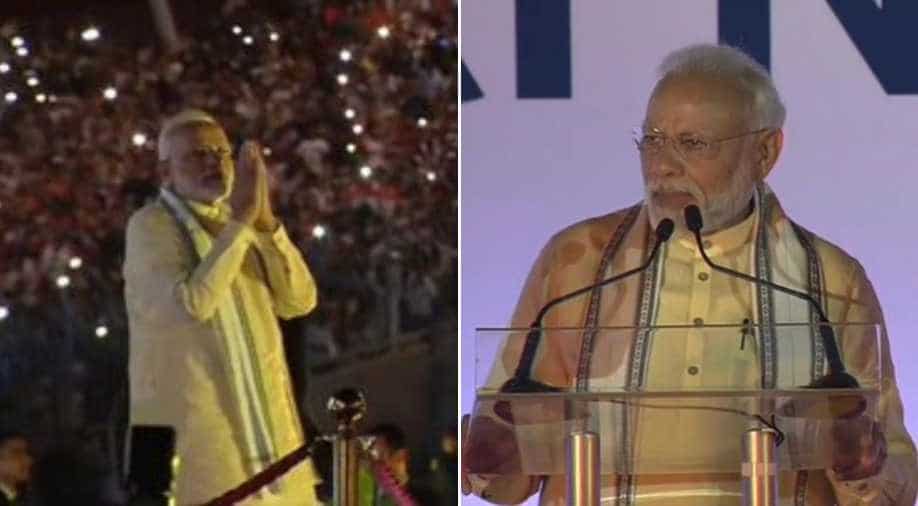 "The welcome Bahrain has given me made me feel that I am in some part of India," the prime minister said.

Prime Minister Narendra Modi on Saturday addressed the Indian diaspora shortly after reaching Bahrain. He is the first Indian prime minister to visit the country.

"The welcome Bahrain has given me made me feel that I am in some part of India," the prime minister said.

"There is an old relationship between Gujarat and Bahrain.I'll be going to the temple and will pray for your well being. I will launch the redevelopment of the temple. This temple is a reflection of your faith and tribute to Bahrain's multiculturalism".

"India has decided to multiply the size of our economy by twice in the upcoming 5 years. 5 trillion dollars economy in the target in front of us," he said.

PM Modi to Indian community in Bahrain: I will visit Shrinathji Temple tomorrow and will pray for peace & prosperity in this country. It is also a matter of happiness that renovation of this temple will also officially begin tomorrow. pic.twitter.com/UDFsf3oo1u

PM Modi said that it could too long for an Indian prime minister to visit Bahrain.

PM Modi said India is one of the most digitally connected countries and this has made banking available to many in India. "The cheapest mobile data in the world is available in India," the prime minister said.

He said, "BHIM app, UPI and Jan Dhan have made banking in reach of the common man".

PM Narendra Modi addressing Indian community in Bahrain: I realise that it took quite a long time for an Indian Prime Minister to visit Bahrain. However, I have been fortunate enough to be the 1st Indian PM to visit Bahrain pic.twitter.com/zvoLYq5oq6

He announced that RuPay card will soon be launched in Bahrain and an MoU was signed regarding this on Saturday. Soon will say, "Pay with RuPay to your friends in Bahrain", PM said.

There are around 350,000 Indian nationals living in the west Asian country. Bahrain launched ‘Little India in Bahrain’ project in November 2015 to acknowledge and mark the contribution of the Indian community to the history and progress of Bahrain.

The prime minister broke down during his address and remembered former finance minister Arun Jaitley who passed away on Saturday in New Delhi.

"Few days ago sister Sushma left us, today my friend Arun left me," he said.

Prime Minister Narendra Modi arrived in Bahrain on Saturday on the third leg of this three-nation tour, marking the first visit by an Indian Prime Minister to the country.

Modi was received by Prime Minister of Bahrain Khalifa bin Salman Al Khalifa at the airport.

The prime minister is scheduled to hold a bilateral with Al Khalifa, during which the two leaders are expected to discuss the entire spectrum of bilateral relations, as well as regional and international issues of mutual interest.