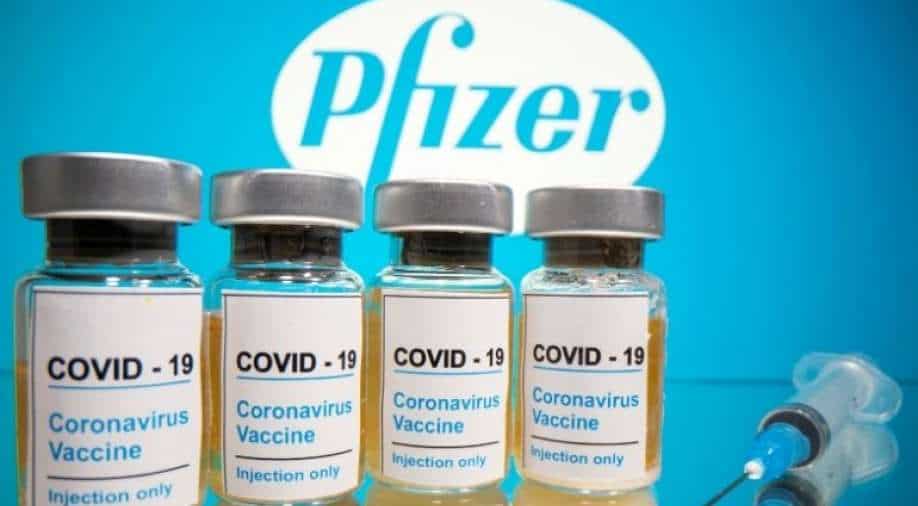 Vials with a sticker reading, "COVID-19 / Coronavirus vaccine / Injection only" and a medical syringe are seen in front of a displayed Pfizer logo in this illustration taken October 31, 2020 Photograph:( Reuters )

NITI Aayog member (Health) Dr VK Paul who heads the National Task Force on COVID-19 underlined that the government was "watching the developments" as Pfizer prepares to apply to the US FDA to get regulatory approvals for the vaccine.

As US pharma giant Pfizer announced that its coronavirus vaccine is 95 per cent effective, the Indian government said that it is a "big challenge" to arrange the cold-chain storage needed to store the COVID-19 vaccine.

The Pfizer vaccine needs to be stored at a temperature of minus 70 degrees Celsius. However, the NITI Aayog member said that the vaccine won't be arriving in the country soon, but informed that the government would be working "out a strategy" to acquire and store the vaccine.

Paul underlined that the government was "watching the developments" as Pfizer prepares to apply to the US Food and Drug Administration(FDA), and moves to get regulatory approvals.

Pfizer had earlier said that it would apply for Emergency Use Authorization in the third week of November while stating that it was "very close" to submit its findings to the US regulators.

Pfizer CEO Albert Bourla said on Wednesday that its vaccine had "no serious side effects" and it will apply for emergency use authorization from FDA within days. Pfizer's vaccine is being co-developed along with Germany's BioNTech.

"With hundreds of thousands of people around the globe infected every day, we urgently need to get a safe and effective vaccine to the world,"  Bourla said.

According to Moncef Slaoui, head of Trump administration's "Operation Warp Speed" initiative the FDA may approve the Pfizer-BioNTech vaccine early next month and added that from January, 25 million people in the United States would be vaccinated per month.