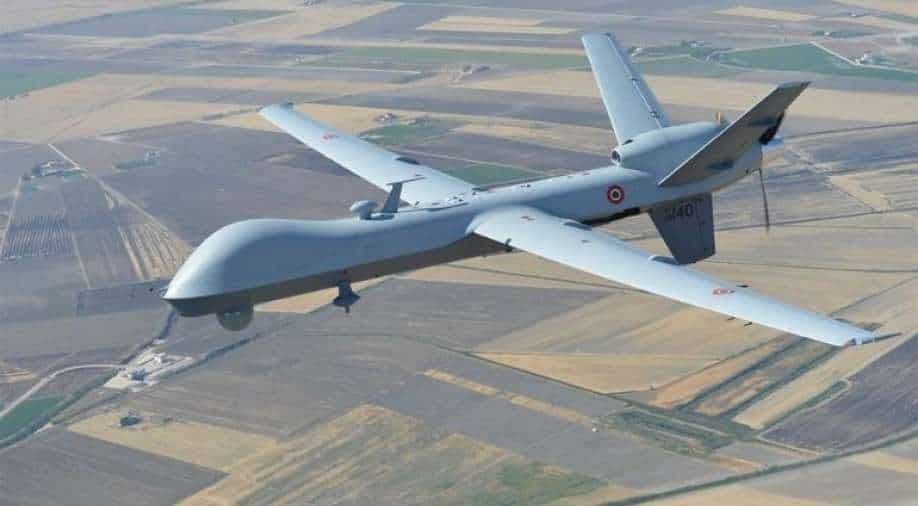 Predator drones are a part of the weapons package offered by the US to India Photograph:( ANI )

The proposal to acquire the MQ-9B long-endurance drones, armed with air-to-ground missiles, is likely to be cleared by the Defence Acquisition Council (DAC) in the next few weeks following which it will be placed before the PM-led Cabinet Committee on Security

India is set to finalise a long-conceived proposal to procure 30 multi-mission armed Predator drones from the US for the three services at an estimated cost of over $3 billion (around Rs 22,000 crore), official sources said on Tuesday.

The proposal to acquire the MQ-9B long-endurance drones, armed with air-to-ground missiles, is likely to be cleared by the Defence Acquisition Council (DAC) in the next few weeks following which it will be placed before the PM-led Cabinet Committee on Security, they said.

The sources said various key aspects of the procurement including the cost component and weapons package have already been finalised and the mega-deal is set to be sealed with the US by the current fiscal.

Vice Chief of India Navy Vice Admiral said the proposal will be placed before the DAC in a "short while".

"The whole effort of the procurement process is that we take a very balanced decision and therefore inputs of all stakeholders are taken. The process is on and we have progressed quite a bit on this process. This will move to DAC in a short while," he told reporters at an event.

The procurement proposal has been moved by the Indian Navy and all three services are likely to get 10 drones each.

The remotely piloted drones, manufactured by US defence major General Atomics, are capable of remaining airborne for around 35 hours and can be deployed on a range of missions including surveillance, reconnaissance, intelligence gathering and destroying enemy targets.

Indian armed forces have been focusing on procuring unmanned platforms including armed drones following the eastern Ladakh standoff with China and a drone strike on the Jammu airbase.

Explosives-laden drones were used to carry out the attack on the Jammu Air Force station in June in the first such instance of suspected Pakistan-based terrorists deploying unmanned aerial vehicles to strike at vital military installations in India.

In 2019, the US approved the sale of armed drones to India and even offered integrated air and missile defence systems.

The Indian Navy has been strongly pushing for the procurement to boost its overall surveillance over the Indian Ocean, a region that has witnessed increasing forays by Chinese ships and submarines in the last few years.

Last year, the Indian Navy received two Predator drones on lease from the US, primarily for surveillance over the Indian Ocean.

The two non-weaponised MQ-9B drones were leased for one year with the option of extending the period by another year.

In February last year, India sealed a $2.6 billion deal with the US for procurement of 24 MH-60 Romeo helicopters from American aerospace major Lockheed Martin for the Indian Navy. The delivery of the helicopters has already begun.