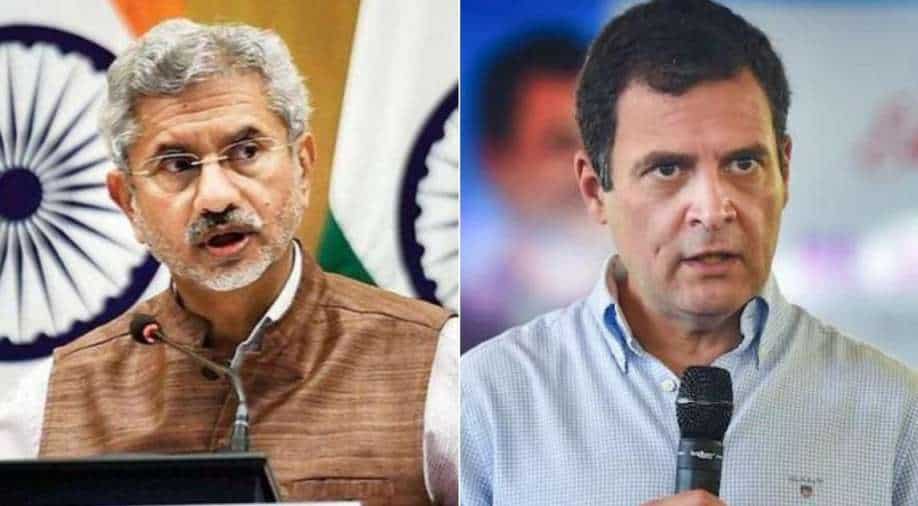 This is a combined photo of S Jaishankar (L) and Rahul Gandhi (R). Photograph:( PTI )

Gandhi in his Parliament speech said that the PM Narendra Modi's government and its foreign policies have brought China and Pakistan together.

Responding to the same, Jaishankar recalled some incidents when the Congress government was in office. He said, "Rahul Gandhi alleged in Lok Sabha that it is this Government which brought Pakistan and China together."

ALSO READ | 'Won't endorse it': US on Rahul’s remark that China, Pakistan together due to India’s foreign policy

He said that China built the Karakoram highway through PoK in the 1970s and CPEC was started in 2013 when Congress-led UPA was in power at the Centre.

"Perhaps, some history lessons are in order: In 1963,Pakistan illegally handed over the Shaksgam valley to China. -China built the Karakoram highway through PoK in the 1970s," Jaishankar tweeted.

He added, "From the 1970s, the two countries also had close nuclear collaboration. -In 2013, the China-Pakistan Economic Corridor started. So, ask yourself: were China and Pakistan distant then?"

-From the 1970s, the two countries also had close nuclear collaboration.

-In 2013, the China-Pakistan Economic Corridor started.

So, ask yourself: were China and Pakistan distant then?

Meanwhile, the United States has also reacted to the controversial remarks by Gandhi, stating that it does not agree with Gandhi's claim that Modi's foreign policy has strengthened the Pakistan-China relationship.

On being asked about Gandhi's comments, US State Department spokesperson Ned Price said, "I will leave it to the Pakistanis and the PRC to speak to their relationship. I certainly would not – would not endorse those remarks."

Rahul Gandhi in his speech said the government has brought China and Pakistan together. "The Chinese have a very clear vision of what they want to do. The single biggest strategic goal of India's foreign policy has been to keep Pakistan and China separate. What you have done is, you have brought them together," he said.

"Do not be under any illusion, do not underestimate the force that is standing in front of you. You have brought Pakistan and China together. This is the single biggest crime that you could commit against the people of India," he added.