India, France security accord has China in mind 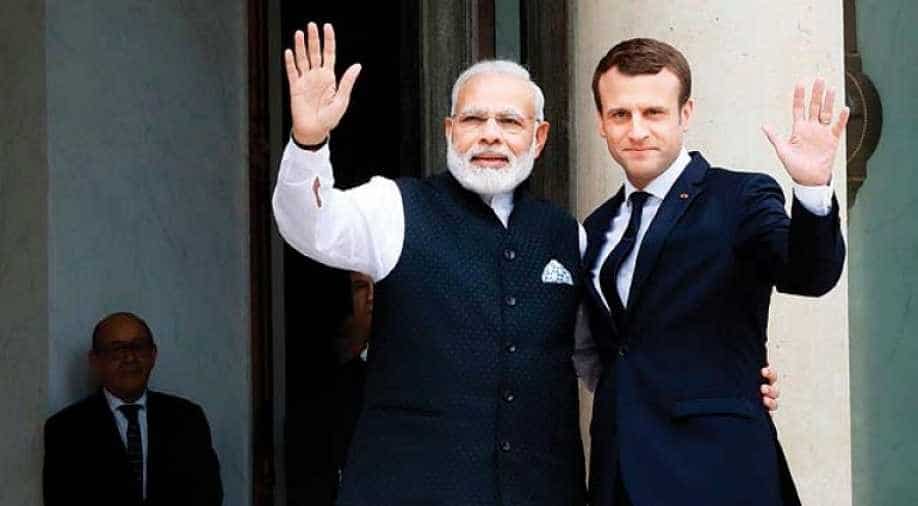 Modi and Macron are particularly anxious as China extended its military presence by opening a naval base in the eastern African nation of Djibouti last year. Photograph:( Zee News Network )

China's mighty strategic shadow hangs over an accord signed by India and France on Saturday aimed at stepping up military cooperation in the Indian Ocean.

Under the deal signed by Prime Minister Narendra Modi and President Emmanuel Macron, each country will open its naval bases to warships from the other.

China's territorial ambitions in the South China Sea already worry world powers. And its move into the vast Indian Ocean -- stretching from the Suez Canal to the Malacca Strait -- has heightened that concern.

Modi and Macron are particularly anxious as China extended its military presence by opening a naval base in the eastern African nation of Djibouti last year.

Beijing is also building up its trading network -- the so-called One Belt One Road initiative -- which involves many of the Asian and African nations that line the Indian Ocean.

It has built a port in Pakistan's Gwadar, taken a 99-year-lease on Sri Lanka's Hambantota and bought a number of tiny islands in the Maldives.

All of this has alarmed India, which sits at the heart of the Indian Ocean region.

"They essentially work at the behest of the state and all of their investments are actually not commercial investments but strategic investments and they are meant to serve a geopolitical purpose," said Abhijit Singh, an analyst at the Observer Research Foundation, a New Delhi-based think tank.

Modi made clear when he came to power in 2014 that boosting India's influence in its immediate neighbourhood was a strategic priority.

His government expressed fury when Sri Lanka let a Chinese submarine make a stopover in 2014. Colombo refused a similar request the following year.

India has stepped up its patrols in the Sunda Strait in the eastern Indian Ocean and the Persian Gulf, while boosting its maritime surveillance capability around the Andaman and Nicobar islands off Myanmar, where Chinese warships and submarines have increasingly been on patrol.

Reunion island is in turn a key French territory in the Indian Ocean and Paris also has extensive Pacific interests.

"We have a strong maritime power, a big navy with our nuclear submarines," Macron said in an interview with Indian television broadcast Friday.

France is "very active in this region to preserve collective security and for me India is one of the critical partners to preserve stability in the whole region."

China strongly denies any territorial motive against India despite its huge investments and military moves. "The two countries are partners in development not rivals," said the foreign ministry in Beijing.

Liu Zongyi, a specialist at the Shanghai Institute for International Studies, told AFP that India was using the "China threat" to extend its own military power.

Some international experts have doubts about Modi's response to China in the Indian Ocean and elsewhere.

"On a regional level, the Modi government has not proposed a convincing alternative to the new Silk Road proposed by Chinese leader Xi Jinping. India just does not have the same financial and administrative strength as China," said Isabelle Saint-Mezard, a South Asia specialist at Paris VIII university's institute of geopolitics.

Brahma Chellaney, a professor at the Centre for Policy Research in New Delhi said "India is at last waking up to this new threat."

But he is among many who fear storms in the Indian Ocean.

"For the moment, China cannot take on India in its own strategic maritime backyard," Chellaney said.

"But the country is growing, deploying submarines and the situation could quickly change to India's disadvantage."