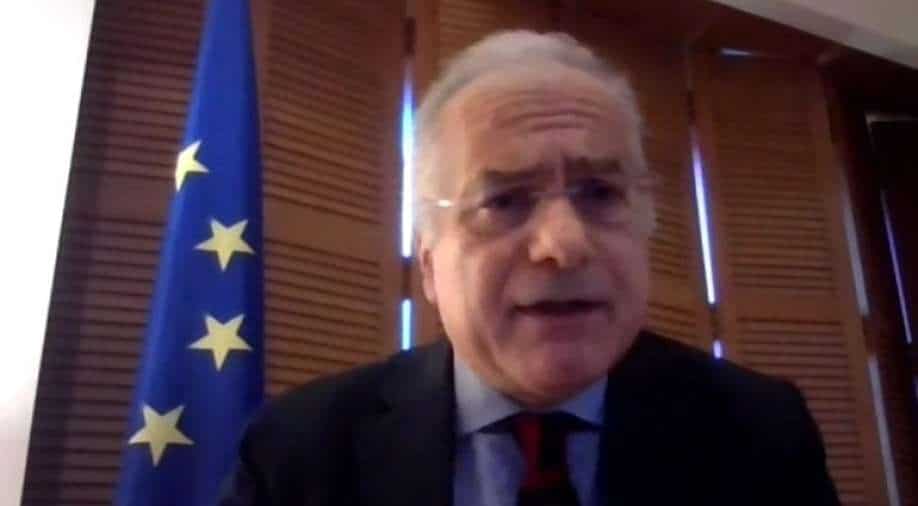 Calling India-EU Leadership summit of May 8 a "turning point" in ties, the European Union's envoy to India, Ugo Astuto, said, "We want to work together so that we can shape the global agenda".

This is the second time this format of one world leader and all 27 EU member states meet happened. The first was with US President Joe Biden in March this year.

Speaking to WION's Sidhant Sibal, envoy Astuto spoke about the connectivity partnership, a key outcome of the summit saying, "connectivity" should be "grounded in principles such as sustainability... transparency."

The other key outcome of the summit was that both sides decided to resume talks on India-EU free trade agreement.

On Indo-Pacific, the envoy said the bloc's strategy is "close to the Indian vision" and "India is clearly a key player" in the region.

In April, the European Council approved conclusions on the EU's Indo-Pacific strategy.

He also spoke on the EU's assistance to India amid the covid crisis, with flights from Finland, Germany, Greece, Netherlands, Slovenia, Portugal, Malta expected to come to India soon.

WION: According to you, what is the key outcome of the India-EU leadership summit and how will it increase the ties at a time the world is changing fast?
Ugo Astuto: It has been an extremely successful meeting. It has been described as a turning point and a historic meeting. I think it's a fair assessment. What we have seen is a clear indication — the intention of both sides to work for change in our strategic partnership. The meeting has taken place against the backdrop of this major crisis of covid. So, what emerged is a clear message of solidarity from the EU and its member states vis-a-vis India in difficult times. There is an understanding that as an international community we all need to work together if we want to address the emergency.

India has been leading by supporting the rest of the world since the outset of the emergency by exporting medicines and vaccines. We are trying to help India as much as we can and that is why we have set up this operation within the civil protection mechanism. So, a strong message of solidarity and intention to bring the world together to overcome this crisis and then a number of very concrete outcomes. We also took a decision to resume negotiations on the free trade agreement, on investment agreement and on a geographical indication agreement.

We have set the ground for a broad and ambitious economic agenda. We have also established a working group to deal with very topical issues such as reforms in WTO, resilient supply chain, and we want to discuss market access issues. We have agreed on a connectivity partnership which, I believe, is an important platform grounded in our common belief in a rules-based system of international governance, cooperative approach to international relations.

There was a clear message from the meeting that we want to work together in addressing global challenges such as climate change, the loss of biodiversity and digital transition. The twin priorities of the greening of our economies and digital transition — these are priorities that are shared by the EU and India. We want to work together so that we can shape the global agenda in a way that is conducive to the pursuit of global common goods. These are some highlights and a number of issues that came up

WION: In terms of FTA, the resumption of talks has been since it has been announced. What next? Are we looking at some timeline, when it can be concluded?
Ugo Astuto: These are complex negotiations but what we have taken is the decision to resume the talks, the formal negotiations, and at the last summit in 2020, we had a high-level dialogue chaired by minister Goyal from the Indian side, on the European side by the executive vice president. This dialogue has proved to be very effective. The positive outcome at the summit was also driven by the good work done at the political level and working level. So we want to continue to use this dialogue, a structured mechanism put in place since last year.

WION: Connectivity partnership is another key focus area. What kind of practical cooperation can be seen?
Ugo Astuto: It is an interesting document; it sets the principles, first and foremost. India and the EU come together because we believe in connectivity that is grounded in principles such as sustainability, fiscal sustainability, social sustainability, environmental sustainability, also transparency. We believe in a level playing field for this. We are open market economies, so want the private sector to play a key role in the implementation of projects related to infrastructure. The documents set in place, some principles which are shared, identify dimensions where we can work together for better connectivity, energy, transport, digital connectivity, and people to people connectivity. These are important areas where we can work together in the region and beyond.

For example, the European Investment Bank (EIB), in past few years in India, has been contributing to the development of sustainable mobility by investing in a number of metro systems. The day before the leader's summit, EIB signed a number of additional contracts for Kanpur and Pune metro. We have several instruments that we want to use and connectivity partnership sets the ground for the efficient use of these tools.

WION: Indian PM mentioned covid vaccine patent waiver and EU leadership has also talked about it. Can we expect some major movement coming from Brussels?
Ugo Astuto: We are ready to discuss it, it's a very serious issue. Our priority is to figure out how to ramp up the production of vaccines worldwide and how to make this vaccine available at an affordable price. That is why the EU has been leading in the creation of the COVAX initiative and we are among the largest contributors. We believe it is important to increase production and avoid measures that may disrupt the supply chain. We have also, like India, been exporting vaccines. More or less many vaccines have been exported, as used domestically — around 200 million doses. India has also been leading the way, exporting to neighbors and beyond. We start from the same proposition that we want a response by the international community to the crisis which is based on solidarity and which pursues a global common good.

WION: How do both sides plan to engage on Indo pacific?
Ugo Astuto: You are familiar with the council conclusions adopted a couple of weeks ago. The council's conclusions make it clear that the EU is a stakeholder in the Indo-Pacific. We want to shape a strategy for the Indo-Pacific, which we believe is close to the Indian vision. What are the objectives of the strategy, the strategy wants the EU to contribute to the region which is prosperous and stable and where international law is respected, including the law of the seas. We believe in a rules-based system of international governance. We believe international communities are best served when international law is respected. These are principles and values shared by India. Based on these agreed principles, I think there is wide scope for cooperation between the EU and India in the region. India is clearly a key player in the Indo pacific. It has been an active player and has been developing its own vision and there are obvious convergences and space for the EU and India to work together.

WION: Can you update us on the current situation when it comes to assistance to India?
Ugo Astuto: We have additional member states joining in. Flights will be coming from Finland, Germany, Greece, Netherlands, Slovenia, Portugal and Malta. The list gets longer every day; it a massive joint effort by all 27 member states coordinated by the EU civil protection mechanism and everyday planes landing. It is a concrete testimony to the fact that we have a strong partnership between the EU and India which I am sure will emerge stronger from this crisis. We have been helping each other as much as we could.